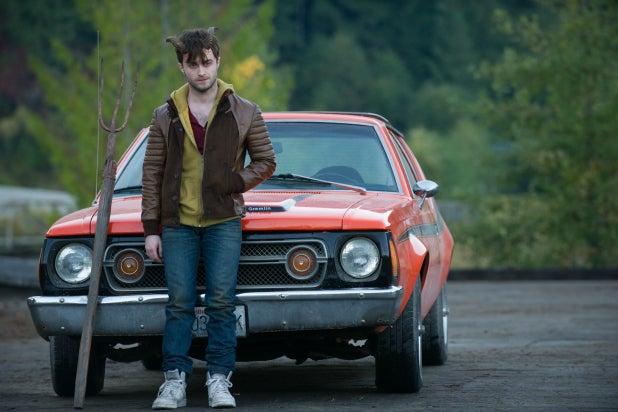 There must be something in the water: 2014 has already given us Alejandro González Iñárritu’s “Birdman,” revealing a previously untapped sense of mordant humor in the usually dour director, and now there’s “Horns,” in which Alexandre Aja — best known for fright-fests like “High Tension” and the remake of “The Hills Have Eyes” — reveals a gift not just for comedy but romance as well.

Granted, he’s doing so within a fantasy-horror context, but much of what makes “Horns” so impressive, and such fun to watch, is the film’s ability to juggle a variety of genres. (In addition to the aforementioned, it’s also a whodunit with “Stand by Me”-esque flashbacks about a group of friends who grew up together and all still live in the same small town in the Pacific Northwest.)

See video: Daniel Radcliffe Makes Two Reporters Beat the Hell Out of Each Other in New ‘Horns’ Trailer (Video)

Adapted by Keith Bunin (“In Treatment”) from the novel by Joe Hill, “Horns” centers around Ig (Daniel Radcliffe), who has not only lost his lifelong beloved Merrin (Juno Temple) to a horrific assault and murder but also finds himself the prime suspect, with ravenous local news reporters following him everywhere. Even his closest friends and family seem to doubt his innocence.

After a drunken night with childhood chum Glenna (Kelli Garner), Ig wakes up to find two horns protruding from his forehead. Weirdly enough, no one else seems to notice them — or if they do, they immediately forget them — but the horns aren’t just there to underscore public opinion about Ig: they also compel the people around him to vocalize and even act on their most deeply buried impulses.

Some of these are broadly funny (Ig gets the newshounds to fight each other for an exclusive interview; a doctor’s prim receptionist chews out a bratty child’s mother in the most indelicate language possible), while others are heartbreaking: Ig’s mom (Kathleen Quinlan) tells her son that her life would be so much easier if he would just go away and leave his parents in peace.

While Ig originally sees the horns (and their power over others) as a curse, he eventually realizes that they will help him track down Merrin’s real killer, and the film offers up plenty of potential suspects, from Ig’s substance-abusing older brother (Joe Anderson) to various friends and even Merrin’s father (David Morse), all of whom had their own separate fixations on the sweet-natured young woman.

Juno Temple, for once, gets to add some variety to her filmography by playing a nice girl, and she and Radcliffe have a potent chemistry that elevates the material. The deep bond between the characters is expressed mostly through kids in flashback and adults making out in treehouses, but the actors fill in the screenplay’s gaps, making us believe that Ig would literally go through hell to find the person responsible for taking away the woman he loved so very much.

Legendary cinematographer Frederick Elmes adds an appropriately overcast chill to the locations (British Columbia subbing for Oregon), and the cast strikes just the right tone in handling the film’s over-the-top situations and deadpan humor. Compared to “Tusk,” another recent film that commits fully to an absurdly bizarre set-up, Aja very rarely mishandles the balance between the wit and the scares.

Strangely enough, in its thorough devotion to its premise, “Horns” winds up taking concepts of good and evil, God and the devil, and salvation and damnation more seriously than many of the so-called faith-based movies that have come out this year.

Apart from some song choices already overused in other films (your movie can have David Bowie’s “Heroes” or The Pixies’ “Where Is My Mind,” but not both, especially if you’re also going to throw in a cover of “Personal Jesus”), “Horns” sticks the landing after jumping through a complicated series of hoops. It’s that rare Halloween release that could work just as well on Valentine’s Day.