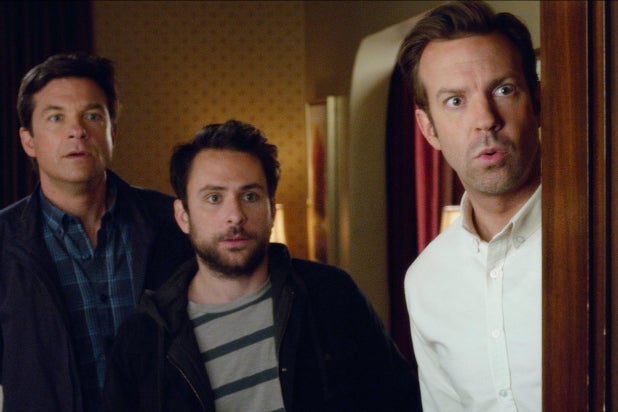 “Horrible Bosses 2” is about as funny as tertiary syphilis, and there’s no cure for it.

The hook to the 2011 original, which made enough money to inflict this sequel upon us, was all in the title, which promised comedy revenge on over-the-top nasty bosses played by Kevin Spacey (billed as “Psycho”), Jennifer Aniston (billed as “Maneater”), and Colin Farrell (billed as “Tool”) by their respective beleaguered workers, Nick (Jason Bateman), Kurt (Jason Sudeikis) and Dale (Charlie Day), a trio of dim bulbs who set out to have all three of them murdered. Would-be hilarity ensued, and left one cast member (Farrell) dead.

There aren’t any horrible bosses in “Horrible Bosses 2” because prim Nick and dumb Kurt and dumber Dale are trying to become their own bosses through marketing a product called the “Shower Buddy.” In the first scene, the friends are on a morning talk show to promote the device, which leads to Kurt getting in a shower and Dale trying to get the water running so that it looks like … they’re having sex! So, you know, ha ha ha. But after 100 more minutes of “Horrible Bosses 2,” you might be looking back on that shower sex gag as a little oasis of almost-funny physical comedy.

Evil capitalist Bert Hanson (Christoph Waltz) takes the boys up on their idea and then steals it out from under them. (How rich is he? He has Picasso’s priceless painting “Les Demoiselles d’Avignon” hanging behind his desk.) And so the boys come up with a scheme to kidnap Hanson’s vile son Rex (Chris Pine). But then they decide against it. But then Rex decides to pretend like he was kidnapped so he can get money from his father. But then…

Along the way, Spacey makes a thankless cameo appearance from prison, and Aniston turns up again as her sex-crazed dentist character Julia Harris to show us that she looks great and that she can be “one of the boys” and roll with every crude punchline she is given. At one point, Nick tells her that he has to go to the bathroom before they have sex, and Julia lustfully says that he can just crap all over her instead. So, you know, ha ha ha.

In the outtakes that habitually end movies like this, there’s a short bit of Aniston breaking character because she is unable to say whatever gross thing they have given her to say. She smiles at the camera, and at us, because she wants to be a good sport. Maybe she even convinced herself that she enjoyed making this movie. But this is the bottom of the comedy barrel, and she must know that on some level.

“Horrible Bosses 2” falls under the pervasive Judd Apatow school of comedy in that most of the performers are just expected to vamp and be funny in and around any lines they happen to have, and it really shows its Apatovian influence in the way that nothing was deemed unfunny enough for writer-director Sean Anders to cut: no throwaway line, no desperate improvisation, even if it violates the supposed stupidity of the characters. (Why, for instance, does the supremely dumb Dale suddenly start wondering about understanding metaphors?) As usual, pop cultural references to other movies are thrown around as if no one in front of or behind the camera ever talks about anything but movies 99% of the time.

The only member of the cast who seems to understand what movie he’s in, and the nature of that movie’s main problem, is Jamie Foxx, who plays an underground criminal advising the boys as though he were giving them script notes. Foxx is the only one whose verbal improvisations are fast and sharp enough to be somewhat funny (a crack he makes about the movie “9 to 5” and Dolly Parton is mean but spirited), and he also hits on the central stumbling block of this movie and its predecessor, essentially asking why these guys are always thinking about murder and kidnapping and other criminal activity as means of retaliation.