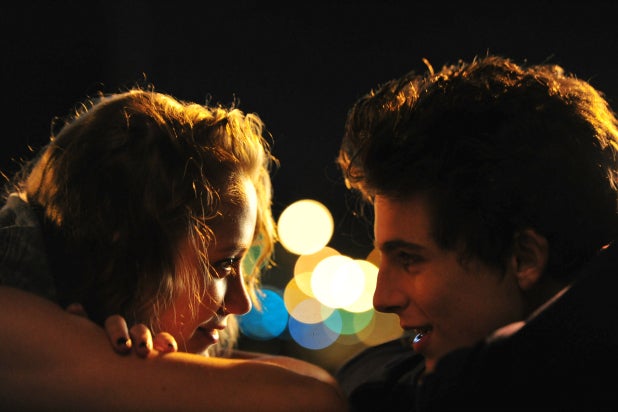 A playlist in search of a movie, the teen melodrama “Hot Summer Nights” flips through its atmospheric, music-saturated visuals with the confidence of a carnival barker, but very quickly the pileup of influences, postures, and tones makes for more of a hot mess than a sweltering good time.

The debut feature of writer-director Elijah Bynum, “Hot Summer Nights” carries that unmistakable first-film vibe of breathless assurance combined with wince-worthy sense of direction, in which the pointing out of movie references becomes the only noteworthy constellation in a superficial coming-of-age yarn.

Bynum wants so badly for you to feel the full force of his brooding, violent, sex-drenched vision of a momentous Cape Cod summer, whereby a James Dean-esque story of the young, wounded and beautiful can be made without Dean. But also — unintentionally — without the coalescing, original psychological insight through which Dean became Dean.

The movie also marks a somewhat hiccup-y follow-up for heart-faced lead Timothée Chalamet, who filmed “Hot” before “Call Me By Your Name,” the breakout indie hit for which the young actor earned well-deserved plaudits and awards. Tasked with a similarly turmoil-ridden youngster finding his identity over a momentous summer, Chalamet’s awkward charms in the role of Bynum’s anti-hero Daniel Middleton are regrettably more decorative than deep.

It’s 1991, and after the tragic loss of his father, Daniel is sent to live out the beach-y months with an eccentric aunt in Cape Cod, where the binary rundown is you’re either a townie, or a “summer bird.” Daniel, who feels like neither, falls under the spell of two photogenic, mysterious, too-cool-for-school figures: a hunky bad-boy mechanic named Hunter (Alex Roe, “Siren”) who beds other dude’s wives and peddles weed to tourists, and a feisty, teasing, lusted-after high school blonde named McKayla (Maika Monroe, “It Follows”).

Latching onto Hunter, Daniel convinces the smoldering loner to expand his drug business, while this brash new kid simultaneously manages to woo McKayla into seeing him as more than a stammering pursuer.

As Daniel starts to puff his chest out as a businessman and boyfriend, though, there’s an underlying problem. Hunter and McKayla are estranged siblings, and if either found out Daniel was involved with the other — Hunter being protective of his sister, McKayla disgusted by her brother’s illicit activity — his whole summer could come crashing down.

That’s on top of the screenplay’s other front-loaded danger elements, from a menacing drug supplier played with chunky-sweet relish by Emory Cohen to an impending Category 4 storm that promises to help solve any of Bynum’s loose ends for the inevitable s–t-goes-down climax.

The characters, the dumb dialogue, and the story mechanics are the biggest problems with “Hot Summer Nights,” which never convinces, while it uses an annoying, legend-building voiceover narration from an unseen local to keep hawking the notion that we’re seeing life-changing, mythic events. (It’s the kind of screenwriter device that invariably promises more than it delivers, unless you’re Martin Scorsese explaining the mob.)

The leads are attractive bores. After Chalamet’s flailing attempts to justify Daniel’s odd nerd-to-outlaw trajectory, Roe’s pretty blankness keeps Hunter from ever truly grabbing our attention as an outlaw to begin with, and Monroe gets lost overcoming Bynum’s trite sexpot-with-a-soul characterization.

Where the movie is most interesting is in the unspoken tension between Bynum’s and cinematographer Javier Julia’s (“Wild Tales”) assured visual sense, and the director’s regrettable need to borrow from other movies. There’s a tantalizingly lush retro production design and color palette that makes the 1991 Cape Cod of “Hot Summer Nights” seem like a lost Americana diorama of the 1950s, a world of atmospherically lit diners, drive-ins, fairgrounds and gas stations.

But that’s not enough. Bynum also feels the need to rev up an imitative Scorsese/Paul Thomas Anderson directing style with long winding takes through parties, centered zooms, song cues, whip pans and quick-cut montages of cool inserts that would be mistaken for parody if they weren’t so self-serious.

Sometimes the call-outs affect entire scenes, as when Daniel, trying to set up a coke connection, feels increasingly imperiled by the bizarre milieu at the home of a dealer (William Fichtner, admirably scary), a bit so blatantly reminiscent of the Alfred Molina freakout from “Boogie Nights” that Anderson should get suspicious that both movie titles share a word.

Mostly, though, “Hot Summer Nights” is a sizzle reel of romantic vice and nostalgia that wears out its welcome fairly fast, leaving a magazine spread of flash, color, and play-acted anguished youth that you can tap your toes to when the song blaring from it is a classic (Chuck Jackson, The Zombies, David Bowie, The Shangri-Las). But jukeboxes aren’t movies.