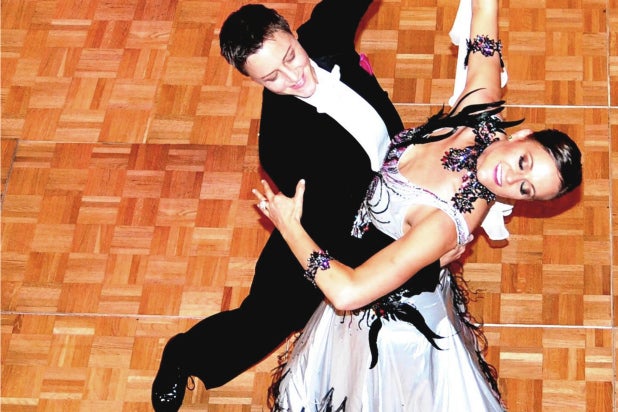 Freedman follows several dancers here as they compete in the April Follies, an LGBT ballroom dance competition that has been running in Oakland, Calif., since 2003, and the Gay Games, which happens every four years. Most of her footage was shot in 2012 and 2013, and so she attempts to build a narrative out of the changes in her protagonists’ lives over time.

Ernesto Palma is a dancer from Costa Rica, and he is first shown rehearsing and competing with Robbie Tristan, a dancer from Hungary. Tristan says that they are both viewed as divas, but Palma is the one who has trouble getting to rehearsal on time and following through on instructions.

There’s a cute moment here where Palma is down on the floor and Tristan is massaging his lower back, and Palma says, “That is so tight,” which cracks both of them up. The wellspring of their partnership is the sexual tension between them, which gives some shape to their attempts at sultry tangos.

Tristan is diagnosed with a brain tumor, and he goes back to his native Hungary in order to avoid high medical costs and to be with his family. And so Palma gets himself another partner, Nikolai Shpakov, who emerges as the de facto star of the film through sheer physical charisma and authority.

Shpakov is from Russia, and he married a woman when he was in his 20s in order to fit in and to placate his family. After having danced competitively with female partners, Shpakov is not sure at first if he wants to dance with Palma, who sometimes likes to wear dresses.

“Hot to Trot” brings up some intriguing differences between straight and gay ballroom dancing without ever quite exploring them in depth. In gay ballroom dancing, the partners take turns leading, and so Shpakov finds it difficult to give up his own male dominance and to let Palma lead. “It’s Fred and Fred and Ginger and Ginger,” says one of the judges, and that can be difficult to arrange, dance-wise.

Freedman also follows a pair of lesbian dancers, Kieren Jameson and Emily Coles, and a great deal of time is spent discussing Coles’ struggle with diabetes, which feels tangential to the rest of the film. Freedman often has her subjects speaking about themselves in voiceover while they stand at attention for her camera, stiffly and awkwardly, as if they don’t know what to do, and this only emphasizes the aimless quality of so much of the film.

“Hot to Trot” only really comes to life when Shpakov is dancing. The difference between a good dancer and a great dancer is that little bit of extra physical expressiveness in their movements, and Shpakov is always doing exciting and unexpected things with his thick, powerfully built body. The surprise of his dancing comes in the speed with which he shakes his hips and the stylish abandon of his arm movements, which are so beautiful and stimulating precisely because his torso is so strong and solid and immovable.

Freedman kept filming her subjects for so long that she saw their relationships break up and new relationships get started, and she observes all of this without ever being able to make it mean anything. When her dancers go to the Gay Games, which should be a climax for the film, Freedman has the Pointer Sisters’s 1982 hit “I’m So Excited” on the soundtrack, which is such a tired-out song cue by this point that it signals not excitement but existential dread.

“Hot to Trot” shows far too little actual dancing and devotes far too much time to verbal exposition. Surely Freedman might have found a focus for her film if she had narrowed it down to a study of Shpakov, who has the smile of a movie star and the dynamic dance moves that seem to spring up so naturally in his native country.