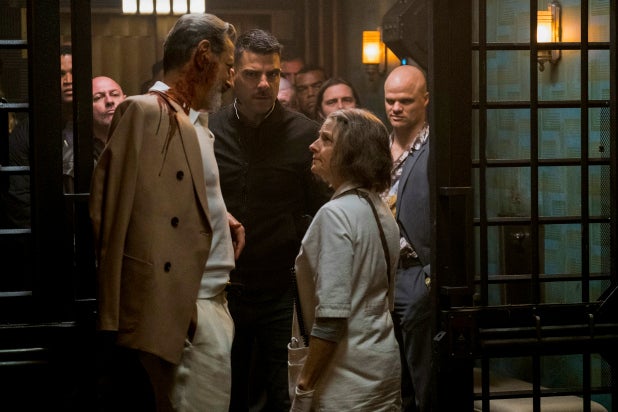 One of the great qualities of Jodie Foster over the course of her acting career is that she goes with anything: Disney, Scorsese, issue movies, serial killers, period romance, even Mel Gibson onscreen and off. Her terrier vibe, those open eyes, that often sly delivery — they’re all immensely versatile.

“Hotel Artemis,” for example, is pop-dystopian quasi-Tarantino Los Angeles noir action thriller hooey about a boutique penthouse hospital for criminals who need stealth medical care. And yet Foster — aged up but energized as the grey-haired, tightly-wound nurse who runs the place like your favorite loved-but-ornery grade school teacher — fits right in with her molecule-shifting intelligence.

Puttering around in infirmary whites and a rust-colored sweater, using surgery gadgets while a confluence of untrustworthy, violent guests make her character’s hermetic existence progressively worse, Foster sells “Hotel Artemis” better than its own writer-director, Drew Pearce, a genre overstuffer who’s seen too many movies, and also maybe too few.

Though it boasts an agreeably preposterous scenario and a weird mixed bag of physicalities and acting styles — from Foster and Sterling K. Brown to Jenny Slate and Dave Bautista — the movie is itself an eye-rolling performance of cyber-pulp tropes and pop-movie excesses that undercuts its spotty pleasures at nearly every turn.

Our introduction to the titular way station for wounded baddies comes through Brown’s character Sherman, a meticulous bank robber whose brother Lev (Brian Tyree Henry, “Atlanta”) is shot during a getaway that runs up against a metastasizing, violent civil unrest (over the public’s water being shut off by the company that privatized it) that threatens to light up all of Los Angeles.

Watch Video: Sterling K. Brown Hulked Out After 'This Is Us' SAG Win: 'My Jacket Split Right Down the Back'

The brothers’ destination is the members-only Hotel Artemis, a dimly-lit Art Deco-designed hideaway on the 12th floor of a downtown LA building, where weaponry isn’t allowed, organs can be 3D-printed, and guests go by the room names (Waikiki, Niagara, Nice). Currently occupying two of the Artemis’s five rooms are an obnoxious arms dealer (Charlie Day) and a sexy French assassin (Sofia Boutella).

Foster’s Nurse has been overseeing this shady operation for two decades, lately with the help of Everest (Dave Bautista), a tattooed, hulking orderly-handyman-enforcer who takes pride in calling himself a “health care professional.” But the worsening sitch in the streets outside soon adds two problematic visitors to the Artemis: a wounded, pleading cop (Slate), who has an inconveniently emotional link to the Nurse’s traumatic pre-Artemis life (shown in flashback snippets featuring a blonde-haired boy); and the Nurse’s kingpin boss (Jeff Goldblum), with his hotheaded son (Zachary Quinto) and their gang of thugs in tow.

It’s a busy night, one involving stolen diamonds, angry stand-offs, bloody killings, secret missions (and secret pasts), and retribution. That also makes for a relentlessly busy movie, one that might have strengthened its hardcases-on-a-collision-course atmosphere had a narrower viewpoint been applied through which to noir-ishly unveil its cross-purposed characters. (After all, it doesn’t need to be “Grand Hotel Artemis.”)

The obvious choice would be Foster’s character, considering she’s the most compelling three-dimensional figure by far, followed by Bautista’s. (They’re the kind of offbeat-scientist/freaky-assistant pairing the old Universal horror machine would have known how to exploit.)

Elsewhere, Brown has an effectively rogue-ish vibe as his own semi-heroic storyline emerges, but most of the casting ticks boxes: Day continues to yell his way through films, Boutella leaps and slashes with expected flair, and Goldblum Goldblums. Even Pearce’s cinematographer — Park Chan-wook regular Chung-hoon Chung — is more an homage choice (sickly underlit interiors, even a hallway battle à la “Oldboy”) than a bid for originality. Cliff Martinez’s pulsating, insistent score, meanwhile, is often there when it doesn’t need to be, like an insecure bid for extra helpings of menace.

And yet it’s all strangely watchable, in the way you sometimes feel for injured players fighting their way through a loss. You can look at “Hotel Artemis” and think, “Oh, like the swanky hangout for assassins in ‘John Wick,'” and you wouldn’t be wrong in that dismissal, but Pearce’s version is still disreputably nifty, and his love for the Nurse, and Foster’s heavyweight cred, provides a sometimes satisfying core of movie-mad regard.

Though Pearce’s affection for hard-boiled dialogue doesn’t always match his execution, Foster lands the best ones, and delivers them with the right nostalgic mix of humor and weary cynicism, as when she tells the gunshot-treated Boutella, “This is America, honey; 85% of what I fix is bullet holes.”

Mostly, though, Pearce’s screenplay serves up too many aphoristic baubles (“You work with what you got, not what you hoped for”) that get repeated back later for that strained, I-heard-what-you-said-and-now-I-get-to-say-it-to-you effect. Seriously, it happens, like, 29,000 times, and it’s never effective. But it takes just one moment of Foster, after being told to do something, tossing off a deeply real and explosively funny “Nah, I’m old,” and a moviegoer feels, well, nursed.