If you’ve found yourself dispirited by the sour lack of compassion and humanity in the last several Adam Sandler/Happy Madison comedies, it’s both a relief and a surprise to discover that his sweetest, kindest humor lurks in the most monstrous of packages: Sandler’s Count Dracula returns in “Hotel Transylvania 2,” and this time the old bloodsucker becomes a doting, in his words, “vampa.” (“What? ‘Vampire’ and ‘grandpa.’ I thought that was totally obvious.”)

Three years ago, the first “Transylvania” was a fresh and funny alternative to Sandler’s bitter misanthropy in mean-spirited comedies like “That’s My Boy” and “Grown Ups,” and after subjecting us all to “Blended” and “Grown Ups 2” (to say nothing of the disastrous “The Cobbler”), Sandler and his usual crew of co-stars owed us a second visit to this haunted hotel.

See Video: Dracula Teaches His Grandson to Be a Vampire in 'Hotel Transylvania 2' First Trailer

The first time out, Dracula had to accept the fact that his darling daughter Mavis (voiced by Selena Gomez) was in love with mortal Jonny (Andy Samberg), despite the older vamp’s prejudice against humans, a mob of whom had killed his wife and Mavis’ mother. With the hotel now open to human guests (but still as creepy and kooky as ever), Drac’s anti-mortal bias bubbles up anew when Mavis and Jonny’s son Dennis (Asher Blinkoff) approaches his fifth birthday without having yet sprouted vampire fangs; if they don’t show up by the time the boy turns five, he’ll be full-on human.

Worrying that Mavis will take the boy away to live near the in-laws in California should he turn out not to be a monster, Dracula convinces Jonny and Mavis to leave town so that he — and monster pals Frankenstein (Kevin James), Murray the mummy (Keegan-Michael Key, taking over for CeeLo Green), werewolf Wayne (Steve Buscemi) and invisible man Griffin (David Spade) — can spend some scary quality time with the kid and, with any luck, get those fangs a-poppin’. 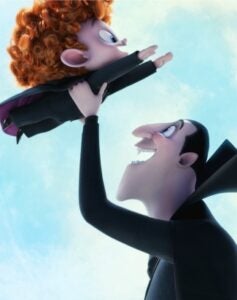 As in the “Grown Ups” movies, this group of middle-aged friends discovers that they’re not as young as they once were, and that they’ve been supplanted by a new generation. (Frank — who finally gets a line this time acknowledging that he’s actually Frankenstein’s monster — is too famous to be frightening, while exhausted-dad Wayne’s attempt to attack a deer fails when he’s distracted by a thrown Frisbee.)

But whereas the jokes in the “Grown Ups” series feel reactionary and bullying, the family-friendly “Hotel Transylvania” gags (in the script by Sandler and Robert Smigel) instead come off as clever and humane, even when they’re making fun of helicopter moms and lawsuit-sensitive summer camps.

Lurking as a potential menace throughout the film is Dracula’s father Vlad (Mel Brooks, undead and loving it), who’s even more violently opposed to humanity, leading to a farcical birthday party in which Jonathan’s family must pass as zombies and other creatures of the night. This all culminates in some lessons about tolerance and understanding that are slightly diminished by the movie’s desire to eat its devil’s food and have it too, but between the outrageous visuals from director Genndy Tartakovsky (including an absorbent alien who’s like a walking lime Jell-O mold) and the non-stop barrage of puns, jokes and sight gags, the clumsy moralizing is easily forgiven.

If there were a movie jail, most of Adam Sandler‘s cinematic output would be enough to send him there — but the “Hotel Transylvania” cartoons are what he could show the Hollywood parole board to prove he’s not entirely a lost cause.