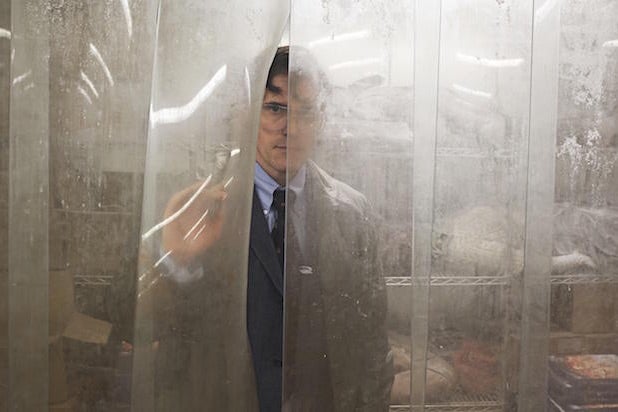 Lars von Trier seems confused. On the one hand, one may argue that the director’s latest film, “The House That Jack Built,” is unrelentingly misogynistic: After all, of the five “incidents” Jack (Matt Dillon) describes to Virgil (Bruno Ganz), or “Verge” as Jack calls him, four are the torture and murders of women.

On the other hand, Jack — who might be a fictionalization of von Trier himself — is not very bright. Nor is he as “charming” the way some serial killers (HH Holmes, Ted Bundy, Jeffrey Dahmer, to name a few) have been described. Nor is he, nor the film for that matter, memorable in any way. “The House Jack Built” feels slightly gratuitous, at times trying to be artistic while simultaneously begging for people to love it, or to love von Trier, pretty pretty please.

The film opens to pitch black with a conversation between Jack and Verge, assuming a journey of sorts during which Jack not so much confesses to his crimes but rather brags about five particular “incidents” that span across 12 years in his murderous career. Each incident features a different type of female: the “insufferable” woman he gives a ride to (Uma Thurman) and kills with her car jack; an untrusting widow (Siobhan Fallon Hogan) whom he fumblingly strangles; a single mother (Sofie Gråbøl) and her children whom he hunts under the ruse of a family outing; and a “simple” blonde beauty (Riley Keough), the only one he claims to have had any feelings for. The latter victim he ties up, cuts off her breasts, and keeps one as a wallet after he murders her. With each incident, Jack becomes more focused in his method, losing his OCD compulsions to clean up after his kills, and adapts the name “Mr. Sophistication.”

Rather than delve into the reasons why Jack is a killer, von Trier simply proposes that Jack is a psychopath who is devoid of any feelings or emotions. Jack likens the relationship between a killer and their murders to that of the connection between an artist and their art, musing that perhaps that worst tyrants in history might have been misunderstood artists, calling some of their horrific acts “the beauty of decay.” Sprinkling in some shots of artwork, and some animation to drive this point even further, it’s hard not to think of this in a way as a personal statement from von Trier to critics of his past films.

No stranger to controversy, his films have prompted audiences to walk out in disgust and compelled the Cannes Film Festival to have ambulances on hand during one of the only public screenings of “Jack Built.” Von Trier might not agree with being called a narcissist and misogynist, and so to make a statement of sorts, he infuses the script with narrations that question why men are always at fault; as Jack states, “Men are born guilty, while women are born victims.”

Also Read: Lars Von Trier's 'The House That Jack Built' Scores $172,000 in One Night - More Than Half of Total 'Nymphomaniac' Gross

It’s clear that for von Trier, provoking audiences to question his motives is a bit of a game, not to mention a great publicity move. Who wouldn’t want bragging rights that they sat through a film that had an ambulance on hand in case it was too much to handle?

Serial killer narratives work because of how audiences connect to the killer, whether in fear (“Halloween,” “Nightmare on Elm Street”) or half-heartedly rooting for them (“Silence of the Lambs,” “Dexter,” “Mr. Brooks”); we have to feel something for them. Though Matt Dillon fully captures the look of a serial killer, especially in his expressionless eyes revealed in close ups — I will never look at Dillon the same again — the script gives us nothing to root for, nothing to fear, nothing to like or dislike. It’s not Dillon’s fault that the story itself is as lifeless as the victims in Jack’s freezer.

Oh yes, there is a freezer, and a remote location with a small-town feel, and yet despite having Jack gainfully employed as an architect-engineer (or at least, letting us assume so), no one knows Jack. And despite his claiming to having killed over 60 people, it takes well over a decade for anyone to catch on to his murderous leanings.

Much like the vacancy in Dillon’s expression, the script is utterly devoid of sentiment. The shaky, handheld camera tries to fill that void by giving the audience a sense of being part of the unfolding trauma. Other films like “The Blair Witch Project” 0r “The Evil Dead” have used shaky-cam as a useful tool, but here, it’s just annoying.