“House of the Dragon,” HBO’s nearly $200 million attempt to franchise “Game of Thrones” with a blockbuster prequel spinoff, secured 9.986 million viewers across linear and HBO Max platforms in its Sunday night premiere, the network said Monday.

It marked the largest audience for any new original series in the history of HBO and the largest series launch on HBO Max across the U.S., LatAM, and EMEA markets. The network noted that Sunday night viewership for an HBO series typically represents 20% to 40% of the show’s total gross audience, leaving room for bigger totals to roll in in the coming weeks.

It was an impressive start for the expensive fantasy series, which is the first “GoT” spinoff to receive a greenlight to series at HBO. The brand’s high-profile certainly helped establish a solid floor of viewership. Remember, “Game of Thrones” premiered in 2011 with “only” 2.22 million live linear viewers.

“It was wonderful to see millions of ‘Game of Thrones’ fans return with us to Westeros last night. ‘House of the Dragon’ features an incredibly talented cast and crew who poured their heart and soul into the production, and we’re ecstatic with viewers’ positive response,” Casey Bloys, chief content officer, HBO and HBO Max, said in a statement. “We look forward to sharing with audiences what else George, Ryan, and Miguel have in store for them this season.” 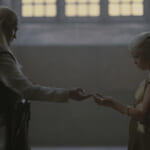 The “Game of Thrones” series finale was watched by a record 19.3 million live multiplatform viewers in 2019, including the most-watched single telecast HBO ever recorded with 13.6 million linear live viewers. The final season averaged more than 40 million viewers per episode when accounting for delayed viewing across all platforms, according to HBO.