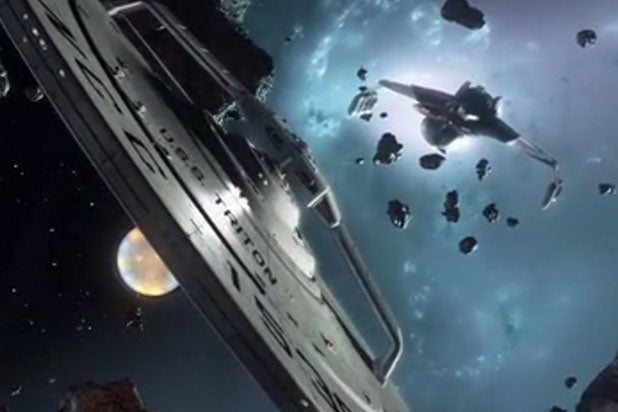 The original “Star Trek” franchise has inspired countless fan-made films over its nearly 50 years, but a new amateur production in the works titled “Star Trek: Axanar” represents a warp-drive leap from its predecessors — the movie has raised $1.13 million in crowdfunding so far, making it one of the highest-financed fan films ever made.

They’ve since budgeted the feature film, which will be broken into four installments, at a total of $960,000, or $240,000 per episode. The seven-figure bankroll raises questions about just how “fan” the project is and at what point it poses a threat to the authorized franchise.

“It’s not a traditional fan film, and doesn’t have those limitations with it,” executive producer Alec Peters told TheWrap, justifying “Axanar’s” relatively sizable budget. “Although we fall under the fan movie, we’ve tried to make the product as good as coming out of the studio.”

The official line from CBS and Paramount, which manage the TV and film rights to the ‘Star Trek’ franchise, respectively, is not to endorse such a production.

“CBS has not authorized, sanctioned or licensed this project in any way, and this has been communicated to those involved,” a representative from the network told TheWrap. “We continue to object to professional commercial ventures trading off our property rights and are considering further options to protect these rights.” (Paramount did not return TheWrap’s request for comment.)

Peters said he and his team met with CBS last week but the network didn’t offer any specific guidelines concerning what his crew can and cannot do — the network simply told him that they can’t make money off the project.

Studios have historically been lax toward films made by fans, even benefiting from the added attention they garner for their properties.

“CBS has a long history of accepting fan films,” Peters said. “I think ‘Axanar’ has become so popular that CBS realizes that we’re just making their brand that much better.”

“Axanar” has generated more than twice those productions combined, allowing Peters’ team to lease a warehouse in Valencia, California, for three years and build a set to make their movie “as compelling as the studio films.”

CBS and Paramount’s habit of looking the other way on fan films runs counter to the policy pursued by 20th Century Fox just last month when it shut down a project based on the “Alien” franchise. According to Digital Spy, the homegrown production had cast Carrie Henn, who starred in the 1986 film “Aliens.”

One reason why CBS and Paramount aren’t cracking down on “Axanar” may be that that Peters claims to be limiting the use of “Star Trek” logos and likenesses and using only three protected characters, all relatively obscure: Garth of Izar from the original “Star Trek” TV series, the Vulcan from “Star Trek: Enterprise” and General Chang from the film “Star Trek VI: The Undiscovered Country.”

Beyond the aforementioned characters, Peters says “Axanar” uses the Enterprise, assorted Klingon spaceships and the idea of the Federation and Klingons generally. However, the uniforms, other ships and prop designs are all unique.

“If it’s based on characters or other protectable elements of the ‘Star Trek’ work, then what they are doing is a derivative work and that’s a copyright infringement that is highly unlikely to be a protected fair use,” he said.

He added: “Just because there are a lot of these fan versions being done doesn’t make it legal.”

Bandlow urged Peters to tread carefully. “If you have permission from a copyright holder to do a fan-made film, there’s no problem,” said Bandlow. “But it’s real risky to be relying on an alleged oral licensing agreement to do such a work.

“An argument that this kind of use is not an infringement at all because no profit will be made is just flat wrong,” he continued. “That’s not the law … You will be depriving the copyright owners of a licensing fee where you have to presume there is a heavy licensing history … So arguing that they won’t make money off of it, that’s not going to be a slam dunk.”

While “Axanar” may not pass the fair use test, both Peters and Bandlow agree that studios aren’t likely to petition for a cease and desist in this case. “Studios just say that it’s not worth the fight,” said Bandlow.

“The community wants it,” said Peters. “There would be a huge backlash against CBS. We’re doing it because we’re fans, and fans are crazy about what we’re doing. It’s been overwhelming.”

Support from fans has been overwhelming, according to Peters. Mostly because, he says, they have been under-served by recent “Star Trek” studio films.

“The new ‘Star Trek’ movies by J.J. Abrams left fans feeling cold,” Peters said. “There was little ‘Star Trek’ about them. They were basically modern action movies with characters that we didn’t recognize. And while good movies … ‘Star Trek’ fans just felt they weren’t the ‘Star Trek’ they had grown up with.”