This story about Roger Deakins and “1919” is part of the cover-story package in the Oscars Nominations Preview issue of TheWrap’s Oscar magazine.

For Roger Deakins, shooting “1917” was like playing a game of chess. For a sequence set in a bombed-out French village that served as one of several jaw-dropping set pieces in Sam Mendes’ film, for example, he created a scale model of the village, complete with LED lights.

The goal was to make the whole film look as though it were done in one, unbroken take — and to do that, Deakins needed to carefully choreograph everything: If the actor goes here, then the camera will need to move in this direction, the light will have to come from this church, everything will need to be angled to that, then a flare will go up here and cast a shadow on that wall there.

All of this, Deakins explained, was done over weeks, well before sets were constructed or rigs were assembled. But that kind of filming is a massive undertaking, and surely the unexpected would happen. Plans inevitably had to change, didn’t they?

Maybe things didn’t look exactly the way they did on the scale model, or light sources couldn’t be seen so walls needed to come down — but what you see on screen is very much what was mapped out. The real challenge on “1917” wasn’t the execution on the day of the shoot, it was the planning.

“The crucial thing to start with was, ‘OK, what do we want the camera to do?'” Deakins said. “How do we want to interpret the story? It’s a single shot, but does that force us to just follow them down a trench all the time? How can we choreograph the actors and the action in a ballet so we can pull them down the trench or see them in profile as they go across No Man’s Land or see a wide shot as they go into the crater? It was those things we really concentrated on.”

For instance, a sequence of star George MacKay sprinting down the front line during an attack was accomplished by placing a camera with a gyroscopic head on a motorcycle. But figuring out it could be done on a motorcycle wasn’t the hard part in Deakins’ mind; it was understanding the physicality required to get that shot, storyboarding how it would look and then rehearsing it in an empty field. 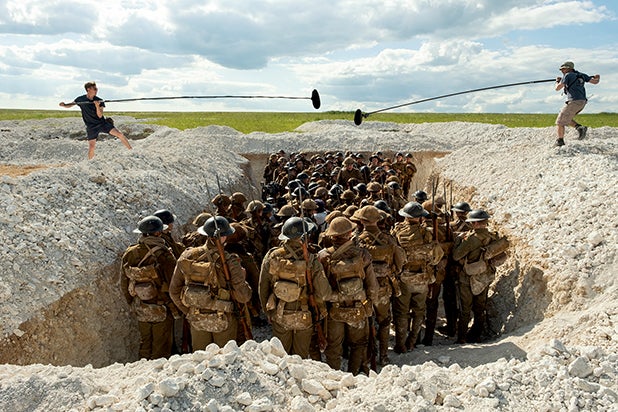 Had Deakins the luxury of actual cuts, he might have hidden light sources just out of frame to mold the light to his liking. But the camera had to move in 360 degrees, and often he’d be shooting in a bunker or a cellar with little more than a few oil lamps on a table. The one exception was during that scene inside the French village.

“We wanted the feeling of, ‘Is this his nightmare? Is it a dream? Is it real?'” Deakins said. “We felt we could stylize it to a degree, make it a bit noirish — hence the idea of the flares and of the shadows coming off the shards of the broken buildings.”

After a legendary career that included “The Shawshank Redemption,” “No Country for Old Men,” “Skyfall” and “Sicario,” Deakins finally won his first Oscar on his 14th nomination for 2017’s “Blade Runner 2049.” He may have outdone himself on “1917,” but to him this was never a massively ambitious undertaking, or even the sort of passion project you pursue after winning an Oscar.

“It’s a very particular story, and the technique serves the story,” he said. “I don’t think it’s quite right to think it’s anything exceptional. It’s just this is the kind of story where you want an immersive experience with these characters.”

And read more of the Oscar Nominations Preview issue here.