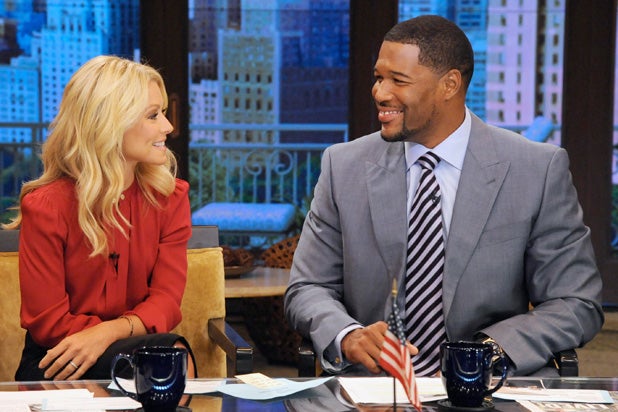 Michael Strahan is down to his final hours as Kelly Ripa‘s co-host. Now get ready for the “Live” bake-off.

ABC is facing weeks of deliberation as it hunts for Ripa’s new partner on the morning chat show for the second time in five years. With Strahan exiting Friday to take a role on “Good Morning America,” Ripa will sit alongside a parade of guest hosts this summer, many of whom will be undergoing what amounts to an audition for a permanent spot.

Other celebrities whose names have frequently surfaced in the TV rumor mill include CNN’s Anderson Cooper, Deion Sanders (ABC has a deal with the former NFL star) and Ryan Seacrest, who now has some open spots on his schedule thanks to the end of “American Idol.”

ABC’s plan, one insider said, is to closely watch how each guest host does in terms of interacting with Kelly and the studio audience, and also parse the ratings. The Ripa relationship will be key; rumors abound of frosty ties between her and Strahan in recent months. Contenders who are deemed to have done well will then be subjected to focus-group testing as network bosses winnow the ranks.

Fortunately for the network, it has plenty of experience with finding new co-hosts for “Live.” After Regis Philbin exited in November 2011, Ripa sat beside 60 guest hosts, including Strahan, Josh Groban, Carson Kressley, Jerry Seinfeld and Seth Meyers.

The nationally syndicated “Live” has been renewed at least through 2020.