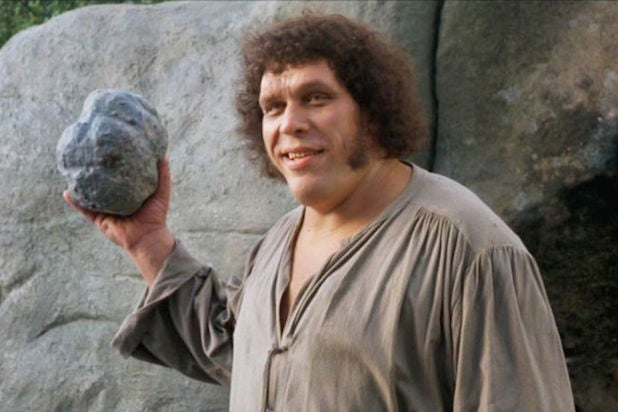 Jane Jenkins, the casting director of “The Princess Bride,” looked at a lot of tall men for the part of the giant Fezzik. But in her mind, there was only one giant who could plausibly haul three people up the Cliffs of Insanity: André the Giant.

In speaking with TheWrap, Jenkins explained how André Roussimoff, better known as André the Giant and quite literally the biggest wrestler in the world, got out of a wrestling match in Tokyo and ended up cast in Rob Reiner’s cult classic comedy “The Princess Bride.” Jenkins and Reiner met with the book’s author William Goldman to find out just what they were dealing with.

“So this Fezzik character, this giant, what are we talking about? Am I looking for a basketball player,” Jenkins recalls asking Goldman. “Oh no, I want a giant like André the Giant,” was his reply, referring to the late star who is the subject of a new HBO documentary produced by Bill Simmons’ Ringer Films titled “André the Giant.”

The first problem was, Jenkins didn’t know who that was. “You don’t know who André the Giant is,” her friend told her at the time. “He is, pardon the pun, a huge wrestler!” (Roussimoff was billed to be 7 feet 4 inches tall.)

Jenkins then tracked down his contact at the World Wrestling Federation (now the WWE) and simply asked to meet him for a movie Reiner was directing. But they learned that André had a conflict with a wrestling match in Tokyo for which he would be paid millions, and unless they were willing to buy it out and match his salary, he was unavailable.

“So we did not have André the Giant,” Jenkins said. “So I proceeded to meet every tall person in L.A. and say ‘if you didn’t duck in through my doorway, you were way too short.'”

Among some of the other potential Fezziks, Jenkins met with Carel Struycken, another 7-footer who was already committed to do a part in “The Witches of Eastwick.” She met a Scottish man who was known as the strongest man in the world, but wasn’t “the tallest man in the world.” And she even met a man she described as being like Ichabod Crane who, when they shook hands, made her own hand feel like “an infant’s hand inside a catcher’s mitt.”

“He said in a British accent, ‘I see there are a lot of fight scenes. I have a rather awkward center of gravity. Would there be a double for me,'” Jenkins recalled. “I don’t think that we can double you,” she responded.

But as if bestowed by Miracle Max himself, André’s fight was canceled, so Reiner and producer Andrew Scheinman dropped everything — literally leaving during an audition — to fly out to Paris and meet the Frenchman. Reiner told TheWrap via email that Scheinman read lines along with André, and Reiner ultimately put all of Fezzik’s lines onto a tape recorder for André to study and learn.

In upcoming HBO doc, Reiner explains that André had auditioned for the part, but upon their first meeting, the filmmaker couldn’t understand a word he said. Reiner also added that André’s sensitive side came to define the cliche of the “gentle giant.”