It’s 1978, and Cheech and Chong are rolling down the California highway in their low rider “Love Machine” in a scene from their first movie “Up in Smoke.” But they’re also rolling the biggest joint you will ever see, a mix of Maui Waui and “Labrador.” Turns out Chong’s dog ate his stash and pooped out what’s left.

Forty years ago this week, “Up in Smoke” was released. And to see these two guys take so many hits on screen made “Up in Smoke” an international cult hit of its own. No one was doing their brand of stoner improv comedy at the time in movies, and no one wanted to follow them and just be Cheech and Chong copycats.

Also Read: Cheech Marin and Tommy Chong Are Not Their Characters: 'It's All for the Love of the Art'

It sounds audacious and so far ahead of its time, but the mood toward marijuana has shifted, stoner movies have become their own genre, and Cheech and Chong themselves aren’t hippie outcasts but are household names.

“We’ve always characterized ourselves as middle of the road dopers,” Cheech Marin told TheWrap. “We weren’t radical. This is the norm. You just don’t know it yet.”

Remarkably though, Cheech and Chong didn’t just help change the national perception of marijuana. “Up in Smoke” may be a silly road trip movie about two dopers looking for a joint, but it also showed an underrepresented part of Los Angeles. It worked to change the image of Latinos in pop culture. And it even helped change the face of comedy.

The plot (and as Marin was quick to note to TheWrap — yes, there is one) involves Pedro and Man, two of Cheech and Chong’s best characters, traveling between L.A., Mexico and back before taking the stage at The Roxy Theater for a Battle of the Bands. But before they can do that, they have to find a joint.

“These two guys, the essence of their characters is their state of being, living from one moment to the other,” Marin said. “And watching them find a joint is much more interesting and funny and instructive about what was happening in society than some constructed plot where they have to solve a problem.”

Marin likened “Up in Smoke” to Huck Finn and Jim floating down a river on a raft: “You never know where we’re going to go.” 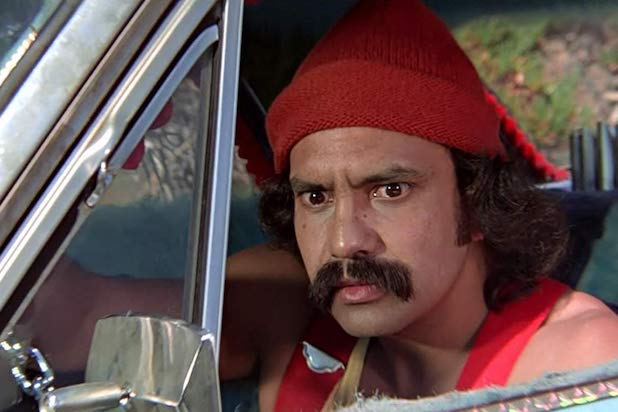 But of course that’s just the set-up. The film opens with Cheech’s Pedro climbing into his car as War’s song “Low Rider” plays. It then shows a disgruntled Man (Chong) making a smoothie in his home while his stiff parents chew him out and threaten to send him to military school.

In a conversation with TheWrap, Tommy Chong explained how these introductions were designed to shine a spotlight on different segments of the population, changing the image of an aggressive MS-13 gang member to a fun-loving car enthusiast.

“Cheech was the first, and it came right out of Cheech’s family,” Chong said. “It was a look into that life that no one had ever seen before.”

“You got to see parts of L.A. you never saw on TV,” Marin added. “You go to these neighborhoods that were vilified or not understood or not even shown, which is the worst. They didn’t exist, but they did exist in our movies.”

One scene that stands out today involves a Mexican family calling immigration, or “La Migra,” on themselves, self-deporting so that they can all find a ride and a meal down to Mexico for a wedding.

“Any position of any group that has to make do, they have to make do in their own creative ways,” Marin said. “I’m sure that stuff happens now all the time. You see the continuum of that mode of existence for different people. And you see the progress we’ve made and the progress we have not made simultaneously.”

Also Read: 'Who Framed Roger Rabbit' Creators on How They Broke All the Rules

“That’s what made ‘Up in Smoke’ what it is,” Chong said. “It was just an optimistic look at life that no matter what happens, you can always play music and smoke a joint and get high and life’s OK.”

Before “Up in Smoke,” Cheech and Chong had been a successful comedy duo for 10 years. Their routine was a response to the boom of improv and sketch comedy in the ’60s and ’70s that the comedians at Chicago’s Second City, San Francisco’s The Committee and Canada’s “SCTV” had been perfecting. Chong said some of those comedians were even doing Pedro and Man characters well before they were.

When they got the opportunity to turn their routine into a movie, Marin said they knew a film could succeed because they knew their audience. But as a film, the Cheech and Chong lifestyle spread internationally in a way it couldn’t on a comedy record. Marin said a small theater in Paris played “Up in Smoke” every weekend for so many years, the film strip was see-through.

“We knew we could run it backwards with Japanese subtitles and find an audience,” Marin said. “It wasn’t an American thing that happened just in the West Coast or East Coast. But because of film, it was instantly accessibly by everybody, whether it was subtitled, dubbed, or just in English. That culture was represented by that movie all over the world.”

“Up in Smoke” also opened within weeks of another landmark comedy, “Animal House.” Both films helped open the flood gates for improvisational style comedy in film. Cheech and Chong had worked with a traditional director and script writer, but borrowed the rambling dialogue style of Robert Altman and ended up leaning on music producer and “Rocky Horror Picture Show” producer Lou Adler, who was making his directorial debut.

“‘Up in Smoke’ turned out to be as great as it is because we actually recorded or filmed our first reaction to every bit in the movie,” Chong explained. “It’s like making love for the first time. You can only have one first time.” 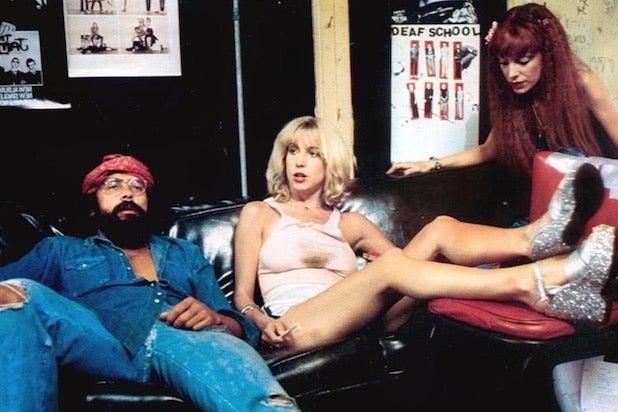 One famous moment that Marin said was unscripted finds Pedro and Man sitting in their van in the back alley to The Roxy. Pedro steps outside, and one of the women they’re traveling with starts telling an especially loud story describing a time she had sex. The van starts rocking, and when Man stumbles out, a crowd of people applauds thinking they’ve just overheard him getting lucky.

Of course the biggest change was looking at the world through a cloud of smoke. In one scene, a cop pulls over their van made entirely of pot, but gets a contact high and forgets why he stopped them in the first place.

“When you think about the effect, it’s subliminal, but it works,” Chong said. “As soon as the cops got stoned, then they quit being aggressive and all they wanted to do was eat pizza. So it was a strong message, subliminal or not, but it worked, that weed could change the law enforcement’s attitude. And it has! Big time!”

What surprises Cheech and Chong most though is that more people didn’t follow in their footsteps. Marin explained it was hard to step back and observe how the world was changing because they were immersed in the hippie, stoner and improv culture from the beginning.

“Somebody would’ve done it if it wasn’t us. It was everywhere. It was the norm,” Marin said. “We had come out, and I remember people said, no one wants to do you, because you guys stole home plate. They would say, oh you’re just doing Cheech and Chong.”

More so than a particular film, routine or album, it’s the Cheech-and-Chong persona that has persevered 40 years later. Marin joked that young audiences come to see them perform now without realizing they ever made a movie after “Up in Smoke,” or that the duo had a history of performing on stage beyond their movies.

“We made our mark, and we’re still doing it. That’s what I found out. There’s no age limit on Cheech and Chong. When we first started out, we were young guys playing old guys. Now we’re old guys playing young guys. It’s crazy,” Chong said. “We are who we say we are. There’s no acting involved. We just become these guys, and that’s the end of it.”