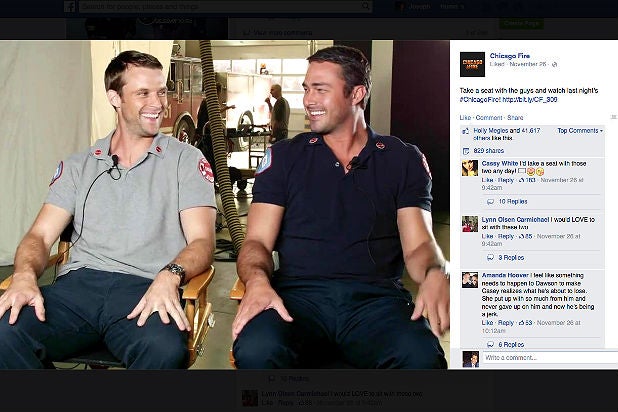 There is very little funny about NBC’s “Chicago Fire” — unless you count the content on its Facebook page.

NBC Digital Marketing Vice President Jared Goldsmith and his team have made a concerted effort to keep it light and humorous across the broadcast drama’s social media footprint, he told TheWrap in anticipation of Tuesday’s fall finale — allowing the series’ serious actors who work in serious situations to show their silly side for the benefit of fans.

“We don’t really approach it from a genre standpoint,” Goldsmith explained of the juxtaposition between the show and its social media. “We didn’t come at this and say, ‘OK, we’ve got a drama social media handle and we need to be in the tone of the show.'”

Instead, they’d rather be the voice of a viewer, covering what is going to be supplementally interesting and relevant to those who tune in, but with a witty approach. They are so in-tune with their audience that Goldsmith and his group even try to use the same verbiage as those who may comment, share, or otherwise interact with the show’s Facebook page, which is currently pushing 1.8 million likes.

A lot of the social content post on the page — including photos and short videos — originates directly from the cast, a necessary helping hand as the social media team is based in Los Angeles and the cast is authentically in Chicago.

Therefore, fans of the show know very well who the photos may be coming from, but in terms of the person who repurposes them for the web — oftentimes tacking on a funny caption — well, that’s a secret. NBC told TheWrap that it wants the social media manager of both “Chicago Fire” and “Chicago P.D.” to remain anonymous for security reasons.

That said, Goldsmith has thought about combining the two jobs of TV star and social media manager — even if that is just wishful thinking.

“I’d hire Sophia Bush as one of my social media managers,” Goldsmith joked, while praising the casts for their contributions. “She gets what works, she has a great rapport, relationship with the fans.”

The “Chicago Fire”-turned-“Chicago P.D.” cast member is the main social ambassador for her new show; on “Fire,” the top draws across Facebook and Twitter are leads Taylor Kinney and Jesse Spencer, the anonymous social media manager told TheWrap.

“Taylor has been great,” the individual said. “We’ve worked with him each week to make sure he’s live-tweeting and engaging with fans across multiple different channels.”

Also read: ‘The Other Woman': Taylor Kinney on the Craziest Thing He’s Done For Love (Video)

The cast and the behind-the-scenes team on-site in the Windy City have also been great generating original ideas that eventually took off on social media. For example, the recent extended Zumba cast video — which sparked the hashtag #Cruzumba — came from the show side.

“Producers really get this stuff and get the value of it,” Goldsmith said, explaining that while his team has met with creator and TV procedural legend Dick Wolf to share their high-level strategy, they mostly interact with his producers on a regular basis.

In that sense, social strategy isn’t just all fun and games — there is quantifiable value and social media metrics that can really contribute to the success of a series.

“We want to create a real valuable experience — be part of the fan conversation — and we think that will ultimately help drive the ratings,” Goldsmith said.

“We’re the voice of the fandom, not just an account,” the employee whose identity we agreed to protect concluded. “You can have a million fans and none of them talking. We want all of them talking.”