David Byrne’s “American Utopia” has lived many lives. First as a 2018 album, then as a tour. Then the tour became a Broadway production, which was filmed by director Spike Lee and released as a concert documentary of sorts on HBO last fall. Now, the show is vying in six categories at the 2021 Emmys, including Outstanding Variety Special.

“This whole idea of community and social issues, all the things that we deal with [in the show],” Byrne said of the project’s continued relevance during a panel for TheWrap’s Screening Series. “If anything, it’s more relevant now than when we were doing the show. The curtain has been parted and all those issues have really come to the surface during the pandemic.”

Lee filmed the show last spring, just weeks before COVID-19 shuttered every theater on Broadway. With a full audience and Byrne’s seemingly prescient greeting, “Thank you for leaving your homes,” the show has been hailed as a particularly relevant bit of culture from the pre-pandemic era.

“We were so lucky that we’re able to do it,” said director of photography Ellen Kuras, who worked with Lee on the film. “We were supposed to do it that September, October of 2019. And we ended up pushing it to the very end, until the show was almost closed. And thank God we did that because then right after that, everybody did go home.” 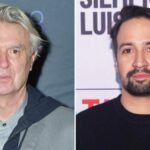 One moment in particular — when Byrne and the other musicians venture into the audience to close out the show with “Road to Nowhere” — stands out as a relic of life before COVID.

“It was not going to happen,” music mixer Pete Keppler said. “And then at the very last minute, ‘Oh, we’re gonna do it.’ So I got to watch the entire band parade right around behind me as I’m mixing the show, which was actually one of my favorite moments.”

“We just did it,” Kuras said. “And so we had to grab cameras. I think I grabbed the GoPro … That was kind of a typical Spike thing of, you know, let’s throw it in the ring and put everything in it and just challenge everybody to see how it would work. And it ended up being so much fun. Everybody just laughed all the way through the whole thing. It was so great.”

However impromptu the production may have seemed on the day, it took months of planning to figure out how to translate a concert-turned-stage show to the screen. The show was filmed three times for the special, with as many as 11 cameras running at once to capture Byrne and the other musicians from as many angles as possible, requiring just about every aspect of the show to be recalibrated. 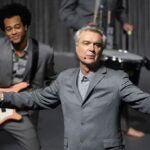 “We did a lot of this on the fly as we’re filming. I think we probably adjusted almost every cue in the show,” lighting director Rob Sinclair said. “For me, the real joy of the Broadway show was the precision that we put into the whole show. From the lighting to Annie-B [Parson]’s wonderful choreography, to the music to the sound. Everything was so dialed in, in a way that we couldn’t do it on the road. And to be able to take that precision and that meaning that was in every moment of everybody’s work and attach it to that film. I think we were really successful in that.”

“It’s just a testimony to the good team that — working in real time — we were able to capture the essence of the Broadway show for the cameras,” added lighting director Brian Spett.

And if all that work hasn’t yet paid off, they’ll get another chance when “American Utopia” gets yet another life with a run in theaters this fall. The show is also slated to return to Broadway next month for a limited run. But as with much of post-COVID life, that spark of spontaneity has been replaced by a more cautious adaptability.

“We’re hoping for mid-September,” Byrne said of the Broadway reopening. “September 17 is the date we’re shooting for, but of course, that’s all Delta permitting.”