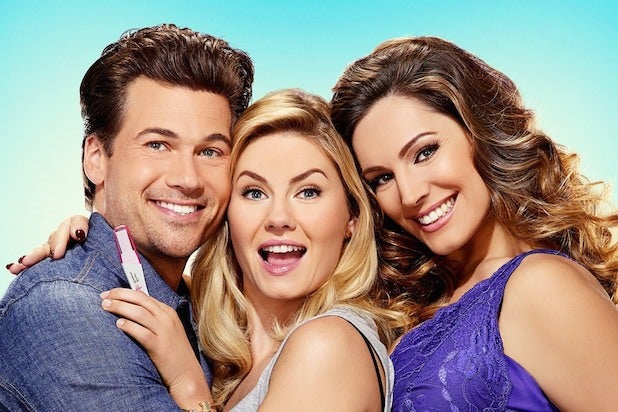 What a difference 18 years makes.

In 1997, Ellen DeGeneres made history when her TV character, Ellen Morgan, came out (as did DeGeneres herself). The groundbreaking episode drew in a whopping 42 million viewers and even won a coveted Peabody award.

Fast forward almost two decades, and DeGeneres is now executive producing “One Big Happy,” a new sitcom about Lizzy (Elisha Cuthbert), a young lesbian, and her straight best friend Luke (Nick Zano), who decide to have a child together. The plan is altered when Luke impulsively marries Prudence (Kelly Brook) — just as Lizzy learns she’s pregnant.

“This is what the world is now,” show creator Liz Feldman told TheWrap. “This is very current.”

The series is based on Feldman’s own real-life story. A few years ago Feldman, herself a lesbian, made a pact with a male friend: If neither of them were in a relationship by the time they reached a certain age, they’d have a baby together.

But just as they were about to start IVF, her friend met the love of his life and got married.

“After he met this wonderful woman, it changed the course of my life. It made me feel all sorts of weird things. I had to adjust my plans as so many people do.”

What seemed like a tragedy at the time became the inspiration for her show, which premieres Tuesday on NBC.

“This is a great step forward,” said Feldman. “There have been no lesbian lead characters on network TV, at least not since Ellen came out.”

In one of the first scenes, Prudence walks around the apartment naked. Lizzy is visibly uncomfortable — a reaction that may defy outdated notions of what it means to be a lesbian.

“We’re breaking a lot of stereotypes,” Cuthbert told TheWrap. “I think a lot of people would imagine that because Prudence comes in naked in one scene, Lizzy would be instantly attracted to her, and that’s not the way it works.”

As more and more states legalize same-sex marriage, gay storylines are evolving. No longer relegated to the role of cautionary tale or comic relief, gay characters are becoming more nuanced. While there are still plenty of threadbare coming-out moments (such as “Empire” on Fox), shows like Feldman’s and ABC’s “Modern Family” are expanding gay narratives, delivering a more accurate and contemporary reflection of gay life in America.

See video: Michelle Obama Tells Ellen What She Misses Most About Life Before the White House

“My show is a post coming out story,” said Feldman. “I’m in my 30s, and I have long since come out and I’m very comfortable with myself. I’m very proud of who I am and have a wonderful community of friends and family around me so the coming out story is not something I’m itching to tell anymore.”

“I was a huge Ellen fan growing up,” Feldman said. “She was absolutely my idol long before she came out. Then she came out and it really changed my life … She really helped me become a person who can accept myself.”

Feldman said she became obsessed with the idea of working with DeGeneres and years later, she finally got to meet her idol in a moment she’ll never forget.

“I was 21 and I went up to her and I said, ‘You’re Carol Burnett, I’m Vicki Lawrence but you don’t know that yet.”

It took six years, but when Ellen was looking for a writer for her new talk show, Feldman landed the gig.