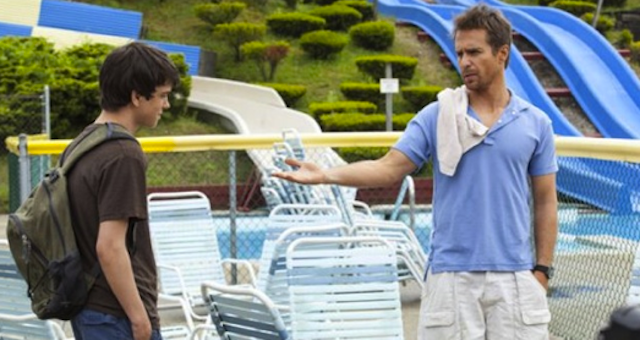 The biggest sale at Sundance this year — "The Way, Way Back" — began with a promise and ended with a fried egg sandwich.

Producer Kevin J. Walsh, a former assistant to Scott Rudin, told the agents selling his movie that he’d make everyone food if they closed a big deal. But before he could cook, a bidding war broke out that would pit the favored Fox Searchlight against a half-dozen other studios, including Lionsgate, Paramount, Magnolia, FilmDistrict and Open Road.

Fox Searchlight won out and paid one of the highest prices for a Sundance movie in recent years — $9.75 million — for the story of an alienated 14-year-old ("The Killing's" Liam James) on summer vacation.

The one big thing in their favor: Once “The Way, Way Back” premiered on Monday, everyone knew it would sell. The film not only drew a standing ovation, but almost every distributor stayed through the Q&A session with the filmmakers — a "rare" occasion, as one person close to the deal told TheWrap. Fox Searchlight was an early starter out of the gate. It had already won an Oscar with Rash and Faxon (left), who co-wrote Alexander Payne’s "The Descendants."

And at one point it was going to produce the film, back when Shawn Levy was going to direct and it was called "The Way Back." Rash and Faxon's script had charted on the 2007 Black List, which ranks the industry's favorite unproduced screenplays.

The project stalled. Levy moved on to other films, and the script bounced around until Sycamore Pictures bought it from Mandate Pictures and Walsh came aboard as producer. Sycamore provided the financial support and Walsh decided Faxon and Rash should direct.

In hopes of sealing the deal, Searchlight sent more than a dozen of its executives to the Sundance debut, many of whom began firing off ardent emails to the filmmakers after they had seen it.

“They came wanting to love that movie, and they were going overboard in an impressive way,” a person with knowledge of the deal told TheWrap. “Multiple people at the company talked about how much they loved the film. It still didn’t mean they’d get it. Sometimes you have a distributor who does all that to justify lowballing.”

But Searchlight didn't have a clear field. As the filmmakers attended an afterparty at the Grey Goose Blue Door on Main Street, several other distributors circled. These ranged from the massive, Paramount and Warner Bros., to the very large Lionsgate, to the medium-sized FilmDistrict, Open Road and Magnolia.

Another factor was that rival agencies CAA and WME had to play nice. The movie was written and directed by CAA’s Faxon and Rash and stars WME clients Steve Carell and Toni Collette.

Around 7 p.m., the dealmakers retired to the WME house, where the discussions began. Alexis Garcia, Deb McIntosh and Graham Taylor from WME would handle the deal with Laura Lewis and Dina Kuperstock from CAA.

“We had some in-person meetings, some phone calls and a lot of the offers were apples and oranges,” Tom Rice of Sycamore Pictures, which produced and co-financed the movie with OddLot Entertainment, told TheWrap. “There were some new companies with big offers and some big companies with low offers.”

For its part, Searchlight offered to buy the movie for every unsold territory, putting its marketing muscle behind the movie in disparate countries around the world. Others wanted only domestic. Still others offered to throw in only specific countries.

Then Searchlight made the first bid, offering somewhere north of $4.5 million — but nowhere near the number the filmmakers were looking for, especially after the successful premiere.

Still, the filmmakers were predisposed to side with Searchlight for the same reason Searchlight aggressively pursued the film: It was a known and trusted commodity and an ongoing partner.

The financiers, though, had no such loyalty. They wanted the best deal possible — and they weren’t entirely sure why the deal had to be done that first night. “Going in, the filmmaking crew was extremely prejudiced towards Searchlight,” the individual said. “Financiers almost always go with whoever is paying most."

Several buyers wanted to hold additional screenings. DreamWorks wasn’t at the festival but was interested. Sony loved it but wanted more people needed to see it, the individual said.

But there would be no extra screenings. Searchlight, Lionsgate and one or two other bidders had been aggressive enough that it obviated the need for any uncertain outsider.

The producers, financiers, agents and lawyers at the WME house weighed the various offers, modeling out the numbers to aid their decision.

Lionsgate, they felt, had a proven advantage. The movie is about a teen who can’t fit in. Lionsgate has already turned the tweener market into billion-dollar franchises with “Twilight” and ‘The Hunger Games.” While “The Way, Way Back” is unlikely to be a box-office juggernaut to rival those movies, $50 million at the box office wouldn’t hurt.

“I have a ton of respect for the intelligence of Lionsgate's Rob Friedman and Erik Feig and Jason Constantine,” Walsh told TheWrap. “I had written two screenplays for Erik and Rob at Summit, and we had a great, long meeting to talk about the movie and their thoughts on marketing.”

But then there was Searchlight. “Some of the competitors knew it was a good movie but didn’t have a clear vision yet,” Rice said. “Searchlight accepted the Sundance version as final cut, and their vision matched our vision.”

Searchlight would also take the movie across the world.

“It’s a really American movie, and as good as the reception was, it is not going to play as well overseas,” one person close to the deal told TheWrap. “The real upside was betting on Searchlight to make it a hit not only here, but tapping into deals around the world.”

Talks then moved to the Searchlight condo, with a much smaller contingent of representatives. Although several involved claim the deal was not yet “exclusive.” If another distributor called with a Godfather offer, all bets were off.

“it was clear they were intending to make it work as quickly as possible,” an individual close to the deal said. “And it still dragged out for several hours.”

As they haggled over numbers, the two sides moved in and out of the condo. The agents would move while Fox talked about it. The Fox team had to move when the agents wanted to call people back at the WME house.

Meanwhile, over the night, Searchlight increased its offer significantly. Making a big bet on the first-time directors, $9.75 million, at 4:30 a.m. it finally closed one of the richest deals in Sundance history.

"Fox Searchlight considers Jim and Nat a real part of their family," Rice said. "They made their interest known for a long time."

The deal done, the negotiating team headed back to the WME house to play pool, listen to music, drink champagne and down vodka. Whiskey would have been ideal given the frigid weather, but Utah’s Byzantine liquor laws had dashed the hopes of a late-night liquor run. The local whiskey from High West Distillery would have to wait.

“We didn’t plan ahead for celebrations, and it isn’t too easy to improvise in Park City,” one person there recalled.

With a couple hours until the papers would be signed, pre-planned improvisation would have to do.

And Walsh made good on his promise: Fried egg sandwiches with asparagus.

“We cracked a bottle of champagne at about 6 a.m.,” he said.