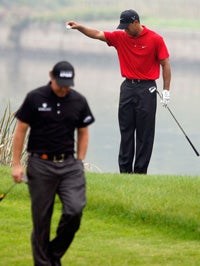 The story of how Tiger Woods managed to squash a magazine from revealing one of his “transgressions” three years ago – first reported by the New York Post, then by the Wall Street Journal – is a familiar one in the golf media world.

This, according to a great post ("Phil Mickelson Better Not Run Over a Fire Hydrant in 2010") by Stephanie Wei, an ex-Yale golfer and occasional Huffington Post contributor.

Wei points out that, in 2005, Sports Illustrated and another publication were rumored to be looking into “an explosive story” concerning another top golfer: Phil Mickelson.

The story involved, “in no particular order, his illegitimate child with a stripper in Ohio, unconventional marriage, and sizable gambling debts, which Callaway supposedly assumed when he switched to them as his equipment sponsor mid-season in 2004.”

But, Wei writes, “the story was killed at SI because Ford, one of Phil’s sponsors at the time, threatened to pull advertising if SI ran it. It’s also been thrown out there that a major golf publication squashed the story because the editor and Phil are good friends and promised Phil he wouldn’t publish it no matter how legitimate the sources were.”

Wei doesn’t name the "major golf publication," but arrangements like these are not uncommon. Condé Nast’s Golf Digest is said to have a $3 million contract with Woods – a chummy relationship in which Tiger is listed on the masthead as a “Playing Editor” and provides monthly golf tips. (The New York Post reports that the magazine is suspending his monthly column in the wake of his infidelity but not severing all ties.)

What does this say about reporters covering golf? They slept on Tiger’s tale, for one thing. Golfers are obligated to give press conferences at every tournament they play — perhaps someone should’ve followed up when the rumors of Woods’ extracurricular activities surfaced.

Let’s give Wei the final word: “Maybe the golf media will be more aggressive when delving through the personal lives of the PGA Tour’s bigger stars, so they won’t be so embarrassingly blindsided the next time a salacious, game-changing story emerges.”