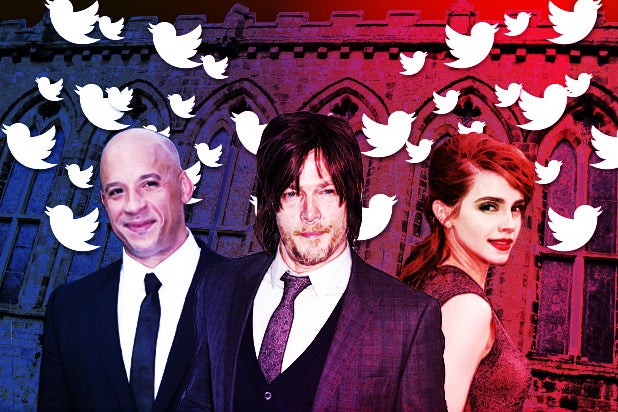 To make it in Hollywood, it used to be that actors needed five basic essentials: talent, looks, timing, a winning headshot and a good agent.

But these days, those looking to score big need to add another item to that list, one that could mean the difference between a lucrative acting gig and the unemployment line: a sizable social media following.

“There is no question that today if you have good numbers on social media, you have become a better choice to be cast,” veteran casting director Mike Fenton told TheWrap. “It would behoove actors to generate a social media presence.”

As Facebook, Twitter and Instagram permeate every corner of our lives, their impact is also being felt in Hollywood. When it comes to landing that coveted gig, a social media presence is becoming nearly as important as an on-stage one.

While casting directors insist it’s talent — not an actor’s online popularity — that matters most, they also acknowledge that, increasingly, performers who have a strong social media following are more likely to get hired than those who don’t.

“If it came down to two professional actors, one of whom had great visibility in social media and one who was barely recognizable, we’d go with the one who could get the numbers,” Fenton said.

That built-in audience not only generates considerable buzz, it can directly affect tickets sales and TV tune-in.

When “Sharknado,” a campy TV movie about a tornado that scoops up giant fish from the ocean and drops them on terrified Angelenos, aired on Syfy in 2013, it whipped social media into a shark-infested frenzy. The movie generated more than 318,000 tweets during its broadcast, clocking in a whirlwind 5,000 tweets per minute at its peak.

It also became the most watched movie in Syfy history at the time.

So it stands to reason that when it came to casting the sequel, producers asked Fenton — whose credits include iconic films like “One Flew Over the Cuckoo’s Nest” and “The Godfather Part II” — to hire social media-savvy talent.

“The thing that the producer was looking for was as many hits on social media as he could possibly get,” Fenton said.

But cultivating a strong following online is an art that requires time, energy and lots of patience.

“Those who are good are those who value their connection with their fans,” said Oliver Luckett, a social media expert and CEO of Los Angeles-based media company, theAudience. “They’re not afraid of telling their story authentically, and genuinely enjoy that relationship.”

Interestingly, it may not necessarily be the biggest stars who attract the largest followings.

Also Read: Neil Patrick Harris on Ellen’s Oscars Selfie That Broke the Internet: ‘I See That in My Nightmares’ (Video)

For comparison, Viola Davis, who’s currently starring in one of TV’s biggest hit dramas, “How to Get Away With Murder,” has a modest 157,000 followers on Twitter.

But it’s the type of fan and their level of engagement that’s the selling point.

Norman Reedus, star of hit AMC series “The Walking Dead,” for example, has “barely” 1.6 million followers on Twitter, but a Reedus retweet can easily fetch tens of thousands of hits. Call it the Norman Reedus Effect.

Josh Peck is another actor with a virtual Midas touch. When the former Nickelodeon star told his 13 million followers he was attending a screening of one of his movies in Orlando, Florida, more than 1,000 people showed up to the event. The film sold out within hours.

“I’m sure Sony was stoked when they heard about that,” Peck told TheWrap. “It’s direct advertising in many ways.”

Having nothing to do between auditions, Peck entertained himself a couple of years ago by posting funny videos on Vine. Within three months, he went from a few thousands followers to an astounding 3 million.

“You’re nurturing a fan base in a way that we’ve never been able to do before,” Peck said. “People are really invested in you and they want you to win.”

The growing need for a social media following has even birthed its own cottage industry.

Luckett’s company, theAudience, helps clients build an online following by creating story lines for their twitter accounts. His team of specialists comes up with ideas and plots specifically tailored to social media, all in an effort to get people to hit that “follow” button.

“We’re now seeing casting decisions being made around influencers,” said Luckett, whose client roster includes Peck. According to Luckett, Peck “went from TV star to Vine star and now he’s in more demand than ever.”

But having a strong social media presence not only helps in getting a job, it can be worth millions.

“If the statement that I hear every day in the media is that the millennial generation is not watching television, then why in the world would I spend $50 million for TV ads?” he said.

Luckett says studios would be better served giving some of their promotional money to the actors, who already have a direct line to their viewers.

Although, Luckett warns, it could be a while before that becomes standard practice.

Last year, actor Kevin Hart tried to negotiate additional money from Sony Pictures — on top of the millions he already received — for promoting his movie, “The Wedding Ringer,” on social media. That didn’t sit well with some Sony execs, one of whom called him a “whore” in an email that was later leaked to the press.

While Hart’s demands sounded greedy to some, to Luckett they make perfect sense.

“Social media presence takes a lot of work. You should be rewarded for that,” he said.