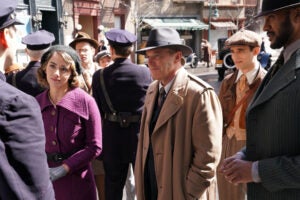 ”It’s rare that an independent film will get that opportunity to play a drive-in,“ Arianna Bocco, of IFC Films, tells TheWrap

As movie theaters across the country began to shut down two months ago, IFC Films made the risky decision not to cancel or postpone its slate of indie and art house film releases, while also pivoting to the handful of drive-in theaters that are still open around the country.

The good news: The decision is paying off since IFC had some of the only new releases playing in theaters anywhere. The horror film “The Wretched,” for instance, has grossed $621,000 in four weeks on less than 60 screens — which would make it one of the Top 20 grossing films on IFC’s slate for each year going back to 2016.

Now entering into its 20th year, IFC continues to use the same digital, VOD strategy it always has.

“Our business, in particular, is an interesting intersection of whole services that are designed to be viewed at home or on-the-go or in theaters and then in an integrated fashion as well,” Lisa Schwartz, IFC Films co-president, told TheWrap. “So I think it gave us an opportunity to flex some familiar muscle, which is being able to really be nimble and pivot and put emphasis on different platforms.”

IFC Films did delay the theatrical release of “The Truth,” the first English-language film from director Hirokazu Kore-eda starring Catherine Deneuve, Juliette Binoche and Ethan Hawke, originally scheduled to open in March. But the rest of the slate, including the Jesse Eisenberg thriller and biopic “Resistance,” the George MacKay historical drama “True History of the Kelly Gang,” the horror movie “The Wretched,” the Beanie Feldstein coming-of-age comedy “How to Build a Girl.” and “The Trip to Greece,” remained mostly unchanged.

In addition to “The Wretched,” which has expanded from 21 to 59 drive-in theater screens, “How to Build a Girl” has grossed $68,000 in three weeks despite playing on just nine screens at its peak. Compare those to the box office runs of an IFC title from last year like Jennifer Kent’s “The Nightingale,” which brought in $400,000 over eight weeks of a domestic run, reaching as many as 79 theaters in its widest release.

“We took a hit on the theatrical line, but the bet we placed was that the audience would shift to a different platform to consume versus not bother with it. And in the case of ‘The Wretched,’ they pivoted in a different direction that was unfamiliar to us historically that was a surprise,” Arianna Bocco, IFC Films’ EVP of acquisitions and productions, told TheWrap.

Schwartz adds that IFC’s business encompasses a number of different platforms, and “over the last few months our projections across the films we released are expected to exceed our initial plans by roughly 35%.”

“That one line of theatrical has taken a hit certainly, but I think the nature of our business being across a number of different platforms is what enabled us to bob and weave,” Schwartz said.

Bocco also told TheWrap that the revenue from drive-ins was largely unexpected and not something that was planned in advance.

“It’s rare that an independent film will get that opportunity to play a drive-in, and ‘The Wretched’ filmmakers joke that they tailor-made it for drive-ins. But in some ways, they really did tailor make it for the drive-ins,” Bocco said. “For us, that’s just an amazing silver lining to this whole horrible situation is that this film with these amazing up-and-coming filmmakers that might not have happened.”

But Schwartz and Bocco said that the distributor has stuck with this strategy because the audience has followed the films online in absence of their theatrical runs, leading to a boost in VOD revenue. And they add that the filmmakers they spoke with were more than happy to get their films out there.

“We can release your film now and make the best of a really horrible situation, still promote it and publicize it like a theatrical film with the publicity, get on the late night Zoom shows and have the long lead press write about it, everything that would’ve happened in a normal scenario, or we can wait for an uncertain future,” Bocco said she told IFC’s filmmaker partners. “And I think 100%, every filmmaker said, ‘No, let’s go. Let’s do it now. Let’s release. We want our films to be seen, and we think it’s actually a good time for audiences to discover the films.'”

The distributor has also seen growth with its SVOD service, IFC Films Unlimited, which launched during Cannes last year and provides subscribers access to the bulk of IFC’s film library. A spokesperson for the company said within the last few months the service has seen a 50% growth in subscribers, as well as a noticeable spike in content being consumed.

Also Read: Beanie Feldstein Feels Like 'Least Cool Person in the World' After Playing Teen Rock Critic in 'How to Build a Girl' (Video)

Schwartz said the distributor has been able to focus on the new service during this time. But rather than do the legwork of launching a new-release film directly onto the platform, the company encouraged fans to explore the deeper history behind some of the new releases. For instance, fans of “The Trip to Greece” can stream all three of the previous “Trip” films exclusively on IFC Films Unlimited.

Many of IFC’s indie competitors, even those with native streaming platforms, such as Kino Lorber or Magnolia, have mostly stuck to their release slates but have done so through a model known as virtual cinemas, in which exhibitors handle a film’s marketing for at-home streaming, and both the theater and the distributor split the rental proceeds 50-50. It’s been a way for local art house fans to support their local venues while still getting access to new films, and the rapid adoption of it has meant it’s likely a model that is here to stay long after the pandemic is over.

IFC Films did offer theater partners access to older, repertory films in its library for free when they do reopen their doors, but the fact that IFC has in some cases already utilized a day-and-date release model has made it possible for the company to pivot in different ways.

“This isn’t just a short-term issue for us,” Bocco said. “When you look at the long-term nature of the ramifications of no studio films going out, no new films going out, for us it was really important to make sure and to understand that when we are releasing movies in the spring that our ancillary partners would still be getting them this year as well. It really was factoring in all of our relationships.”

Schwartz and Bocco said they hope drive-in theaters will stick with independent film even as studio films become available, and they hope as theaters reopen they’ll be able to meet wider demands for product. But whatever the circumstances, it won’t change IFC’s release calendar.

“It’s hard to know, but we have our schedule, and we will proceed as planned,” Schwartz said. “How many people and to what extent they’re participating with us is just a function of where the world is at that point in time. But it will not dictate what we are going to do with our schedule.”