While the production design of every movie ever made faces numerous complications, those complications become even more, well, complex when it comes to a murder mystery like “Knives Out.” Production designer David Crank, for instance, had to turn three shooting locations into a single mansion that serves as the film’s bloody crime scene.

When Crank and his team got started, director Rian Johnson and his location team had already found a pair of mansions that would serve as the domain of Harlan Thrombey, the multi-millionaire mystery novelist portrayed by Christopher Plummer, whose bloody demise sets the events of “Knives Out” into motion.

The exterior of the house was a gothic revival mansion built in 1890 and located just outside of Boston, but the interior scenes were filmed at the Ames Mansion, a 20-room historic site located at Massachusetts’ Borderland State Park. The Ames Mansion, previously seen in Martin Scorsese’s 2010 thriller “Shutter Island,” was used in “Knives Out” to shoot the tense fights Harlan would have with his money-grubbing family, and the intense questioning that private eye Benoit Blanc (Daniel Craig) would put that same family through after Harlan’s death.

Also Read: 'Knives Out' Director Rian Johnson on Which of His Stars Was Hardest to Cast

“There wasn’t a specific kind of architecture that Rian was looking for,” Crank told TheWrap. “The general rule was that both the inside and outside of the house needed to look like the sort of house that Harlan would describe in one of his mysteries. The moment we walked into the mansion we knew right away that it had the personality we needed.”

But neither the Ames Mansion nor the gothic revival could provide the floor plan needed for the most important room in Johnson’s script: Harlan’s office. The script for “Knives Out” required several characters to sneak in and out of the house and up to Harlan’s inner sanctum, a cozy red study with a low, curved ceiling that allows for intimate conversations between Harlan and his nurse Marta, played by Ana De Armas.

To accommodate the script, Crank built the office and connecting hallway on a soundstage, working with Johnson to line up the characters’ movements in the script with the actual layout of the houses and sets used for shooting. In doing so, they were able to help the editors create a seamless transition as the Thrombeys scurry through the halls of their patriarch’s domain.

“We had about three weeks to get the office ready for shooting, so we had to work very fast,” he said. “The funny thing is that the way the office hallway and the upper floor we built on set was designed, it wouldn’t have fit in the actual house you see in the film. But it was made for these scenes where people are sneaking around trying to not get seen and I’m really proud of how it ended up looking in the final cut.”

Another important task for Crank was to fill the Ames Mansion with the sorts of novels and knick-knacks befitting Harlan’s personality. But even though one of the cops in the film quips that Harlan “lives in a Clue board,” the famed board game or the Tim Curry film that it inspired weren’t the main inspiration for the set design.

Instead, the chief influence was “Sleuth,” a 1972 Oscar-nominated mystery film starring Laurence Olivier and Michael Caine that also served as Johnson’s main inspiration for “Knives Out” as a whole. Like “Knives Out,” the film takes place at the luxurious home of a famed crime novelist who is a collector of automata, or moving dolls. In honor of the film “Knives Out” features dozens of automata and dollhouses strung around the mansion.

“There’s a large dollhouse that you can see over Daniel Craig’s shoulder that I thought was a really fun addition,” Crank said. “The automata were Rian’s nod to ‘Sleuth,’ particularly a sailor figure by the door, but they also really fit for the character of the mansion because they were so mysterious and creepy. We found a collector that provided them for us and tried to fit them into rooms where they would feel like they belong there.” 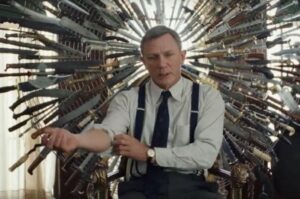 But the biggest prop in the house is the ring of knives in the Thrombeys’ living room, all set in front of a chair and positioned so that the knives appear to be pointing right at the head of whomever is sitting in the chair. When asked if the Iron Throne from “Game of Thrones” was an inspiration, Crank laughed.

“It wasn’t, but I can see why people might make that connection,” he said. “It actually wasn’t originally meant to be that way. It was initially a rectangular structure and the knives were pointed out. Eventually, after various versions, we got down to the final version you see in the film. Rian wasn’t entirely sure what he wanted with the knives, but he knew what he didn’t want, and once we got to that ring of blades pointing in, it finally clicked.”

You can check out David Crank’s work in “Knives Out” now in theaters. To see more of his production design, see his depiction of Civil War-era Washington in Steven Spielberg’s “Lincoln” and his design of the residence of amoral oil magnate Daniel Plainview in Paul Thomas Anderson’s “There Will Be Blood.” Crank has also just finished shooting two 2020 films starring Tom Hanks: the WWII film “Greyhound” and the Paul Greengrass western “News of the World.”

Where do we file ”Knives Out“ among the filmmaker’s output?