Liam Gallagher’s new documentary “As It Was” begins at the rock legend’s lowest point. A little over 10 years ago, after many years of simmering, Liam’s feud with his brother Noel finally boiled over, and their chart-topping Britpop bandOasis finally split. A decade later, that rivalry has only hardened and even threatened to derail Liam’s film.

“Liam Gallagher: As It Was” charts Liam’s comeback tour, starting with the disappointment of his post-Oasis outfit Beady Eye, and followed by a messy, tabloid-fueled divorce, until finally he found his voice and landed a No. 1 record in the U.K.

And yet telling the story of the former Oasis frontman proved to be difficult for directors Gavin Fitzgerald and Charlie Lightening — mainly because they weren’t allowed to use Oasis songs in their documentary. As part of their long-standing feud, Noel refused to license Oasis’s music for use.

“It just got more and more ridiculous. You can’t use Oasis music. You can’t use shots of Noel, but you can use shots of Oasis,” Fitzgerald said. “So we’re in the middle of this rivalry. It wasn’t our intention to portray Noel as a sort of evil person. Once lawyers get involved, it just gets nasty.”

Liam said back at the film’s premiere in the U.K. earlier this year that Noel denied him use of the songs, saying, “That’s the only last thing he’s got, to stop me singing my Oasis songs.” But Noel later responded and explained his rationale for not doing his brother a favor.

“Oh, I turned it down, yeah. If some f—ing moron is going to make a film slagging me off, calling my wife a c—, after trolling my kids on the internet, after being a filthy little misogynist sexist prick who cannot keep his f—ing mouth off Twitter, and then call me to ask me a favor, I’m like, ‘Wow. You are as dumb as you f—g look,'” Noel told Variety. “I don’t give a f— what music you have in your film; you’re not putting any of mine in. It’s like, ‘Can I ask you a favor?’ ‘No, you can’t. Go f— yourself. You’re not using my songs to sell his f—ing film.'”

It forced the directors to be creative in the editing room, tiptoeing around not just music but even what they could show. For one, the filmmakers weren’t allowed to use footage from Liam’s emotional One Love Manchester concert performing “Live Forever” with Coldplay.

“I was told immediately when I came on that Noel would have no part to play and that he’d be keeping a close eye on it, whatever that means,” Fitzgerald said. “I just think that at the end of the day, it all feeds back into Oasis and their fanbase, so why not let Liam use Oasis songs, who started the band? I think it’s a little bit petty, but that’s kind of how they operate, both of them. They take little stabs at each other.”

The other problem for Fitzgerald and Lightening, however, was that, with or without Oasis tunes, no one cared about a movie about Liam. Beady Eye was attracting crowds not even close to the size Oasis once did, and someone in the film says he came to realize, “just being Liam, it wasn’t enough.” 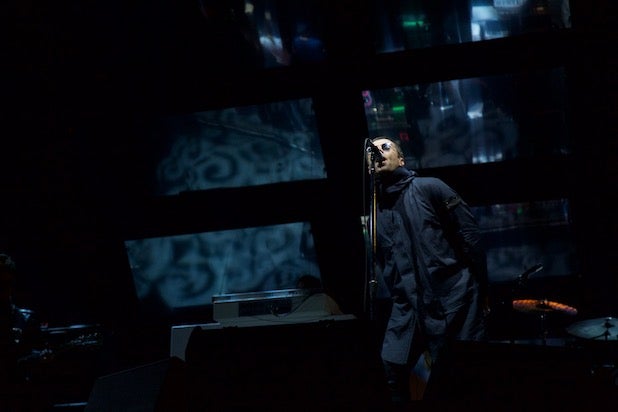 It wasn’t until the 2016 documentary, “Supersonic,” that interest in Oasis started to pick up, and Liam needed to prove with his 2017 solo debut, “As You Were,” that he wasn’t just a “Rock & Roll Star,” but a musician who should be taken seriously.

“They weren’t interested in Liam, he had really gone through the hell of it all. The expectation was very low in making this record,” Lightening said. “I kept saying, this is a film, this is a film, but I don’t think people really took him seriously until after the album had come out and it did really well. And then people were like, ‘Have you got this?’ Yeah, I’ve been telling you, this is the story, this is the movie.”

“As It Was” reveals that not only are Liam and Noel still at each other’s throats but haven’t seen each other in the years since Oasis split. Liam’s friends and associates said in the film that he has reached out to Noel on several occasions but has never heard back.

Even though Liam still has the language of a grizzled rock star, the film makes an attempt to show how he has matured as a performer and a father, most notably in one heartwarming scene of where he goes for a morning jog on the Golden Gate Bridge, something he would’ve never done during his rambunctious youth.

Of course, the question always comes up if will Oasis reunite. Don’t count on it. Liam recently tweeted a less than nostalgic view of his days in the band, and Noel, at a recent concert, proposed a petition to break up the Foo Fighters after singer Dave Grohl suggested the two brothers could patch things up.

“Liam honestly would do it tomorrow. It’s completely in Noel’s court,” Fitzgerald said. “I just don’t think he’s going to go back there. He doesn’t need to. It’s a lot of stress for him obviously, and he doesn’t want to engage.”

“I’d never say no, but they’re very far apart,” Lightening said. “They have to become friends again before they can be in a band.”