TheWrap magazine: “It was an interesting premise to dive into the idea of what positive stuff comes out of alcohol,” Mikkelsen said

This story about Mads Mikkelsen and “Another Round” first appeared in the International Film Issue of TheWrap’s awards magazine.

Like the guy at the party who’s had a few too many, the filmmakers and cast of “Another Round” had a tough time finding their balance. Director Thomas Vinterberg, co-writer Tobias Lindholm and a cast led by Mads Mikkelsen were making a film in which the lives of a group of high school teachers improve (to a certain point) when they decide to stay a little drunk all the time — and if it was hard to figure out the right tone, it could have been catastrophic if they didn’t.

“It’s difficult to see what this movie is in terms of genre,” Vinterberg said. “There was a constant balance that we had to work on, and we worked on it all the way to the last day of editing. In writing, you often have a lot of rules — but when we tried to narrow down our script to tame the beast, it kind of killed it. It really was as if the script had to be drunk as well.”

But the balance, or the level of drunkenness, changed dramatically over the course of the project. “When Thomas first mentioned it to me, his pitch was more like a comedy,” said Mikkelsen. “It was all good and funny and interesting, but I knew that the film would end up being much more than a comedy.”

Mikkelsen had starred in Vinterberg’s 2012 Oscar nominee “The Hunt,” and was anxious to work with the director again. And even in its original form, he found it intriguing to explore the theory put forth by Norwegian psychiatrist Finn Skarderud, who posited that humans are born with a 0.05 blood alcohol deficit, and that we’d all be at our best if we maintained a buzz all day long. 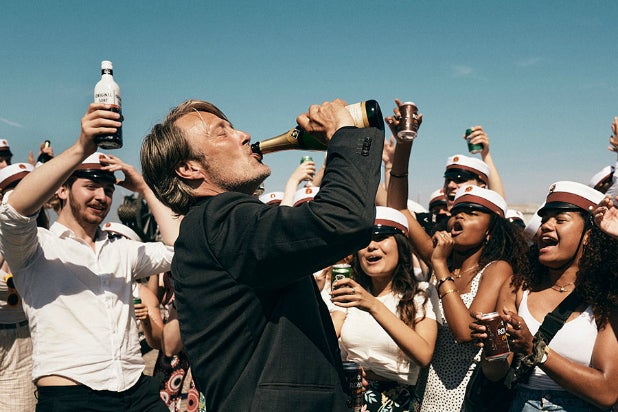 “It was an interesting premise to dive into the idea of what positive stuff comes out of alcohol,” Mikkelsen said. “We know the danger, we know the negative stuff, we’ve done tons of films about that. But what about those two glasses of wine — where the conversation lifts, where you become creative, where you dare do things you never did before? Alcohol has been around for 6,000 or 7,000 years, and people have used it in a variety of ways, often to get closer to the spirits of the gods, but also to become creative.”

But Vinterberg and Lindholm realized that a film that purely celebrated alcohol, which was the original idea, wouldn’t have been much more than a provocation. “I probably would have gotten away with that in my 20s,” said Vinterberg, who is 51. “It didn’t feel sufficient or whole enough now.”

The tone also took a turn as soon as production began. Only a few days into the shoot, Vinterberg’s 19-year-old daughter, who was to have played Mikkelsen’s daughter, was killed in a car accident. After a break, Vinterberg decided he needed to finish the film. “Over time, it became more and more important to me to elevate the project from just being a movie about drinking to a movie about life,” he said. “And when my daughter died, it became not only an ambition but a necessity to continue to elevate this to be a life-affirming film.”

Mikkelsen added, “We went forward, but the film took a turn without us putting any words to it.” For Mikkelsen’s character, Martin, that came to mean dealing with loss and reclaiming family partly because of alcohol and partly in spite of it. “The Martin we see in a variety of scenes when he’s drinking is probably the Martin that he was when he was 22,” he said. “But for some reason, he finds himself at the age of 54 standing on the platform and watching the train going by tremendously fast.

“A lot of people find themselves in situations like that — not necessarily me, since I’ve obviously done a lot of funny and interesting things in the last 25 years. But I recognize the idea. And for him, it’s all about not regretting what the past brought him, but trying to embrace the present and recharge his batteries and figure out why he loves his family and why he loves his job.”