“Rushing this,” said Koenig, “would be stupid.”

It felt like “Serial” was gaining and losing momentum at once. But there was no stopping “Making a Murderer,” Netflix’s docu-series about whether Steven Avery was wrongly convicted of killing Teresa Halbach.

A month after it premiered, lawyers are re-litigating Avery’s case on morning news shows. Ben Stiller and Seth Meyers have made parodies. Google searches for Avery far exceed those for Bergdahl.

No true-crime show had gotten so much attention since, well, “Serial” Season 1, which won a Peabody award and ignited interest in podcasting as a platform with its examination of whether Adnan Syed killed his former girlfriend, Hae Min Lee.

Neither Netflix — which declined to comment for this story — nor “Serial” — which didn’t respond to a request for comment — disclose how many people view or listen to their respective shows. Audiences have to decide what to believe — just as they do with the shows themselves.

“The most disturbing theory I have heard so far for why Season 2 is not doing as well as Season 1 is that the most poetical subject in the world is a beautiful dead girl, and Season 2 lacks a beautiful dead girl,” said Katy Waldman, speaking last week on her Slate podcast. “So people have moved on instead to ‘Making a Murderer.'”

Some listeners have lost the plot with “Serial” Season 2, which expands beyond Season 1 to cover Bergdahl’s mysterious motives for leaving his base, his torture as a POW, and the war in Afghanistan that many Americans would rather forget.

“You hear a lot more people talking about ‘Making a Murderer’ still than are talking about ‘Serial,’ even though ‘Serial’ is still in progress,” Sara Stewart, a New York Post reporter and critic who has covered both shows, told TheWrap. “I think partly that’s just because with both the first season of ‘Serial’ and ‘Making a Murderer’ people feel more invested — there’s something they can do, or more research that they can do on their own after listening to it or watching it. … The Bergdahl story just doesn’t invite that kind of participation.”

Both “Serial” Season 1 and “Making a Murderer” followed a familiar formula of flattering armchair detectives, inviting them to re-examine crimes to find evidence the justice system may have missed. That formula is the basis of an entire network, Investigation Discovery.

But military stories are a tougher sell — which is one reason that one of ID’s sister networks, The Military Channel, re-branded itself recently as the American Heroes Channel. Less than 1 percent of the U.S. population serves in the armed forces, and most never need to worry about being taken by the Taliban.

But we’re all-too comfortable with stories of murdered women.

As Waldman noted in an interview with TheWrap, Edgar Allen Poe is credited with the quote, “The death of a beautiful woman is, unquestionably, the most poetical topic in the world.”

Twists on the trope endure in stories from “Silence of the Lambs” to “Gone Girl,” in part because of its strong basis in reality. Next month, FX’s “The People vs. O.J. Simpson: American Crime Story” will look at one of the most famous cases of a man charged with killing his former wife in a jealous rage.

Young murdered women are eroticized, Waldman says, in a way other victims are not.

There’s nothing voyeuristic about Bergdahl’s story: The biggest mystery of “Serial” Season 2 is whether or not to blame him for the military and diplomatic messes his capture created. Even the U.S. Army hasn’t decided.

Days after “Serial” Season 2 premiered, the Army announced that he would be charged with desertion and endangering fellow soldiers. He could get life in prison — or he might get medals.

“He’s a much more complicated figure,” said Waldman. “We don’t know what his motives for vanishing from his post were. Hae Min Lee, there’s very little you can say against her.” 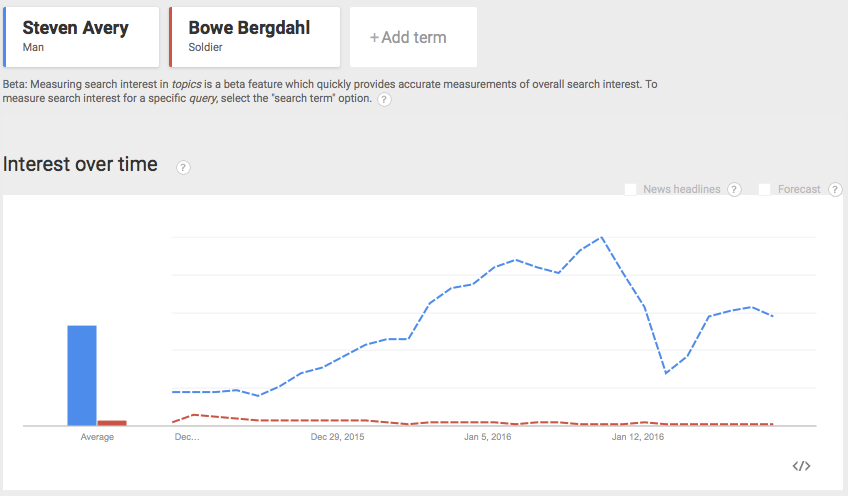 Fans of “Making a Murderer” can root for Avery and his defense attorneys if they believe the filmmakers’ arguments that he was wrongly convicted. Or they can root for the prosecution if they reject those arguments. But it’s hard to say who to root for “Serial” Season 2.

“Maybe Sarah Koenig?” said Waldman. “You don’t want to feel like you’re being roped into being a narrator’s fan club.”

Koenig is less prominent in Season 2, which is built around phone calls between Bergdahl and “Zero Dark Thirty” screenwriter Mark Boal. Much of Season 1’s sense of urgency arose from Koenig’s prison phone calls with Syed: You didn’t know if he was using her, she was using him, or both.

Waldman, who hasn’t seen “Making a Murderer,” still enjoys Season 2 of “Serial.” But she said one reason it hasn’t obsessed listeners as much as Season 1 did is that Bergdahl’s story has been covered more extensively than Syed’s was prior to Season 1.

“They used to have this aura of sort of exclusivity,” she said. “If you wanted access to the story you had to go through ‘Serial,’ and it made them seem pretty important and powerful. And now they’re just sort of a drop in the bucket. Everyone has written about Bergdahl. Everyone has heard about this narrative and has heard it from a bunch of different angles. And it just makes ‘Serial’ itself seem less crucial.”