TheWrap magazine: ”Only in the last 10 years did I start to realize how wrong my beliefs were as a child, and I wanted to put my life into perspective,“ says Latvian-born director Ilze Burkovska Jacobsen

A version of this story about “My Favorite War” first appeared in the Oscar Nominations Preview issue of TheWrap’s awards magazine.

An animated documentary that mixes history and a personal story in the manner of the 2007 Oscar-nominated film “Persepolis,” “My Favorite War” finds Latvian director Ilze Burkovska Jacobsen examining her childhood during the Cold War, when Latvia was under Soviet occupation. And while that’s not typical subject matter for an animated feature, its director envisioned it as that from the start.

“When I got the idea that I will make a film summarizing those 20 years before we gained our independence and freedom (with the breakup of the Soviet Union in 1991), I knew that animation was the only possibility to make it,” she said. “I knew it would be an animated documentary, and I saw that animation would be maybe 75% of the film. It became 85%, and I’m very happy with that.”

The point of the film, Burkovska Jacobsen added, was to grapple with the complicated legacy from World War II, when Latvia was occupied by Nazi Germany and then by the USSR. “We went through a collective trauma,” she said. “And only in the last 10 years did I start to realize how wrong my beliefs were as a child, when we were taught to appreciate war. The Soviet Union wanted us to love war as an idea. I wanted to put my life into perspective of all the things that have happened here.” 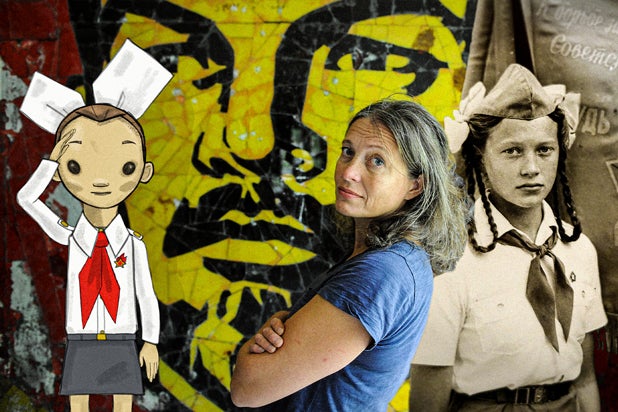 Animated documentaries are more common now than when Burkovska Jacobsen first envisioned “My Favorite War” almost a decade ago – at this year’s Sundance, for instance, the animated doc “Flee” sold to Neon in a seven-figure deal. At the time she began planning her film, though, the filmmaker had to rely on a single model.

“‘Persepolis’ gave me the courage to think that it is possible,” she said. “I was touched and impressed by ‘Persepolis’ when I saw it in the cinema in Norway in the little town where I live. And it was also a very big help later when we started to pitch our film. We pitched it mostly for documentary people, and the only thing they could relate to it was ‘Persepolis.’ Now animation has become more and more common in documentary films, but then the documentary people were very skeptical.”

While she initially envisioned a film that would incorporate lots of stories from other people in her life, Burkovska Jacobsen ended up structuring “My Favorite War” around her own memories. The film’s central character is a young girl named Ilze, whose recollections are intercut with occasional historical footage that the director said is “additional proof that it all happened.” Deliberately and effectively unsentimental in its view of childhood, the film finds Ilze uncovering the remains of a Nazi soldier in her sandbox at one point and undergoing the conflict of having a father who joined the Communist Party to advance his career at another; it’s an intricate mixture of the personal and the political.

“It’s a complicated story,” Burkovska Jacobsen said, “because we have Ilze growing up in the ’70s and ’80s listening to these stories from wartime. And then there is the live-action, and the adult filmmaker who is commenting on those memories from the perspective of the current day.

“It was challenging to balance it all in one film–and to be honest, I was struggling with those questions in my life, too. But we are still a very young country, still finding our way to communicate, and I guess I felt that there is something in our story which could be useful to other people in the world.”