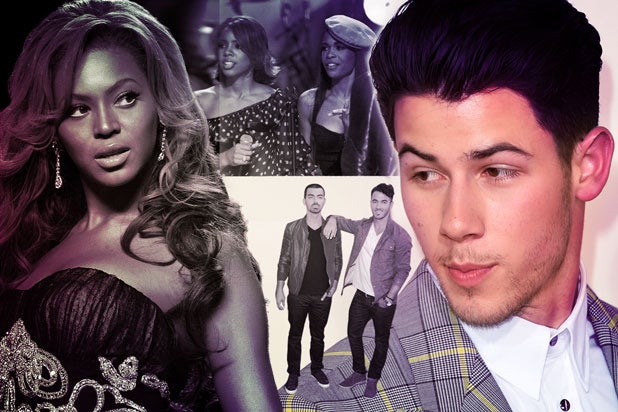 This Saturday takes the stage at the iconic Forum in Los Angeles to host Nickelodeon’s “Kid’s Choice Awards,” and perhaps for the first time in a young life but long career — he’ll be a man of the people, not their schoolboy crush.

Pop culture is undeniably having its Nick Jonas moment: His soulful, honey-coated self-titled album has spawned two hits in “Chains,” just ranked at No. 13 on Billboard’s Hot 100 and “Jealous,” a Billboard Top 10 hit. He’s got a gritty cable drama in “Kingdom” and buzz-castings in s “Scream Queens” and “Goat.” His ripped physique sparks an instant social media frenzy when he doles it out on Instagram.

But how did the littlest Jonas, the choir boy who politely played drums for Disney’s fever-inducing Jonas Brothers band, emerge from his siblings — and an entire category of squeaky clean hopefuls — to become a powerful, enticing force in Hollywood and music, all while retaining his legacy fans?

In essence, how did become the Beyonce? Meaning how did he hit all the right notes similar to Beyonce’s break out from Kelly Rowland and Michelle Williams of Destiny’s Child. Though there is a generational gap between Destiny’s Child’s fans and the Jonas Brothers former tween fans, Nick’s post-career trajectory after leaving Joe and Kevin could certainly draw comparisons.

TheWrap talked with top record label executives, Hollywood agents, TV showrunners and music experts to see how Nick Jonas executed the crossover, which has arguably launched him on a trajectory comparable to the likes of another former Disney Star crossover — .

A Brief History of Jonas

Kevin, Joe and or the “Jo-Bros” as devotees branded them, hit career highs in 2007. Walked onto the Disney scene thanks to‘ own star-making vehicle “Hannah Montana,” the Jonas’ quickly became the idols of viewers 9-14, the channel’s plum demo.

Their 2007 self-titled album from Hollywood Records sold 1.8 million copies, according to Nielsen SoundScan. A follow-up the next year, “Little Bit Longer,’ sold 1.5 million.

“It was a slightly different time, seven years ago. The industry has changed in the way people absorb and discover music,” said Shirley Halperin, news director of Billboard. “But at their height, it was a huge success. It’s someone who could sell out arenas.”

The years following “Little Bit Longer’ saw various solo efforts from each brother, who unanimously maintained the band was still very much active.

Kevin tried his hand at reality stardom with “Married to Jonas,” an E! series that tracked his foibles with wife Danielle Deleasa that ran for two seasons. Joe toured Europe with  and released the 2011 solo disc titled “Fastlife,” which sold 18,000 copies its first week.

Nick himself joined forces with a band under the name “& The Administration.” They released the 2010 album “Who I Am,” which moved about 150,000 copies, per Billboard.

Clearly nothing had resonated as strongly as their band of brothers, so it was a no-brainer when plans came together to mount a national tour in 2013. A pivotal moment came just two days before the opening date, an October 11, 2013 show in Pennsylvania — they called the whole thing off.

“There is a deep rift within the band,” a spokesman for the brothers said at the time. “There was a big a disagreement over their music direction.”

“As soon as the boys decided to separate, in the spring of last year, Nick and I had breakfast the next morning and had a musical discussion that went into the night,” said David Massey, President of Island Records, who had signed Nick as a solo artist at 10 years old and kept close ties to the family after they went to Hollywood Records.

“He had a clear vision, and it was an immediate decision what we would do,” Massey said. They, essentially, were forming “Nick Jonas,” a fully-realized contemporary album with interdisciplinary influences.

“The project he wanted was something with soul, a rhythmic feeling that was coming away from pop-rock and really maximizing his voice,” Massey said.

“He coming away from the purity ring and coming into the young man he’d become.,” Massey said, referencing the famous rings the Jonas Brothers wore in deference to their chastity.

Nick was shedding old skin, and the world was about to see a lot more of his new one.

The current incarnation of  arrived in July 2013, thanks to a harmless Instagram photo Nick shared with the goal of promoting his healthy lifestyle while living with diabetes.

“I never do this but… Healthy living and fitness update. Post workout picture. #diabeticinshape #2.0,” he wrote on a picture of an impressively defined chest and biceps.

Worldwide press covered the photo, completely skirting the diabetes angle and focusing on his physique. Jonas wouldn’t be the first guy in Hollywood whose killer body helped propelled the success.

Take in the franchise, undeniable likeness to the mythical Thor and, decades ago, the splash made in Calvin Klein campaign that still resonates today.

So loudly, in fact, that Jonas himself made national news once again in October of last year, when he recreated the crotch-grabbing Wahlberg shots for Flaunt magazine.

“Nick, especially, was never uncomfortable during his purity phase and he’s not uncomfortable being who he is now,” said Rob Light, managing partner and Director of CAA Music.

“I’m not saying other artists don’t do it differently. Some want to shock, some want to push that part of themselves away permanently. Nick’s just being him and you go for the ride,” Light said.

When asked about strategy within CAA’s walls for bringing Jonas along, Light was tight-lipped but did admit, “if there was one, early-on strategic thing we did — we really fought hard to not let him get labelled.”

Nick also took up with actress and beauty queen Olivia Culpo, compounding his image with a more adult romance. The pair present perfectly — no Twitter shade or club-going. This so-called new phase didn’t just manifest itself in abdominal muscles and good-looking couples.

It’s the DNA of the album, according to Massey.

“He wrote ‘Jealous’ in the first three weeks,” Massey said of Nick’s new album. “Compared to the other projects I’ve worked on, it was incredibly spontaneous. Then, out of nowhere, the TV show came up.”

Fighting For the Breakout Role Departure

In 2014, Jonas went up for the part of a young boxer in a dynastic California family, which would eventually become DirecTV’s “Kingdom.”

“I was a little hesitant to see him, not knowing him at all, just because of the nature of our show,” said Byron Balasco, creator and showruner of “Kingdom.”

“But he was just so damn good. He came in and auditioned and he was just one of them,” he said of the gritty pack of guys portrayed by the likes of and Matt Lauria.

Also Read: Nick Jonas Loves the Gays and the Gays Love Him (Video)

“[There] was no trace of his other life when you saw him. He disappeared into it,” Balasco said, “he came back a couple of times for chemistry reads and quickly emerged as the best guy for the gig.”

What better metaphor than trading the purity ring for the boxing ring?

“He threw himself into the physical training, not just being in shape but fighting and the culture of the gym. There’s a lot of interior life going on. Nick as an actor does an incredible job of bringing a vulnerability,” Balasco said.

Jonas received positive reviews for his portrayal, and “Kingdom” was picked up for a second season — one which revealed that his lead character Nate Kulina is gay. Not only has he expressed pride over the narrative, he still holds the nearly 10 million Twitter followers he’s grown and adding a new sect of gay fans.

In the weeks before “Kingdom” premiered, Jonas appeared at several New York City gay clubs flashing his abs and sending patrons into a frenzy. Some accused Jonas of “queerbating,” or creating homoerotic tension to draw in the demographic, which holds $830 billion in spending power, according to a 2013 analysis fro Witeck Communications.

“He’s found he’s good at playing,” said Light. “He’s multi-talented, works hard and  is not afraid to take some risks.”

EGOT On The Horizon?

Jonas is poised to walk into his future with permission from the industry and the marketplace to wear as many hats as he wants.

“I think you’ll see him as a live musical attraction, back on a stage in New York, you’ll see him acting in movies and not as a pop singer who crossed over,  as someone capable of award winning roles,” said Light. “If he had his druthers, he’d be competing for an Emmy, Tony, Grammy and Oscar, and I don’t see why he couldn’t.”

On screen, “Goat” will give him an opportunity to explore atrocities in the American Fraternity system while “Scream Queens” will likely deploy him as quick-witted eye candy (name one heartthrob who hasn’t benefited from a part in a series).

The chart success of “Chains” and “Jealous” means Jonas’ attempt at soulful, sex-driven R&B passed a crucial test with consumers — not only is he convincing trying on a vibe, he’s convincing in spite of his Disney beginnings.

Through his hard work and commitment, native musical and dramatic talent, Jonas has a hold over entertainment that winds up the stuff of legends.

The Evolution of Nick Jonas: From Purity Ring to Boxing Ring (Photos)

Heavily influenced by soul and R&B, the Nick Jonas of now has come a long way from his teen pop rock.