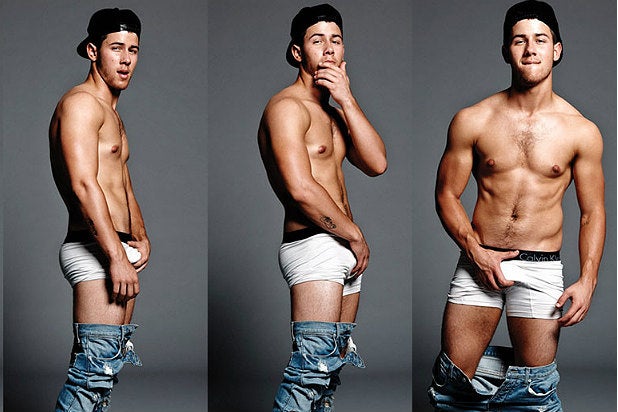 If sex does indeed sell, the ratings for “Kingdom” are sure to be huge.

Nick Jonas, who stars in the upcoming DirecTV drama, is once again showing off the physique he earned while training for the MMA-fighting series.

The 22-year-old stripped down for a new photo shoot with Flaunt magazine, wearing a pair of tight white boxer-briefs and a backwards baseball cap. Jonas paid tribute to Mark Wahlberg in one pose, grabbing his crotch while mugging for the camera. A famous 1992 Calvin Klein campaign contained a similar shot of Wahlberg.

See video: Nick Jonas Loves the Gays and the Gays Love Him (Video)

In another photograph, Jonas puts his hand on his exposed backside, showing off not only his body but the purity ring on his finger. See the picture below.

While the former Disney star used to tout his virginity, along with his two famous brothers, clearly the youngest Jonas is trying to squash his squeaky-clean image.