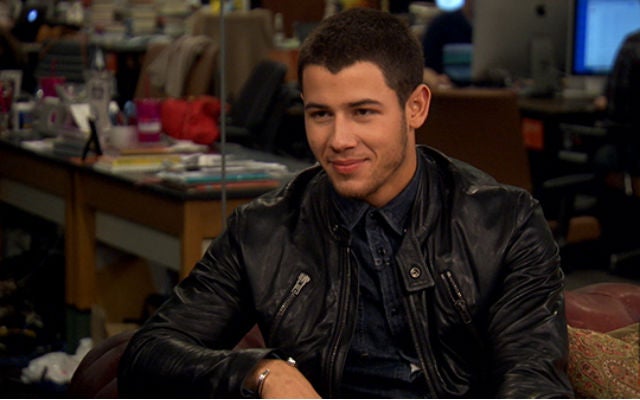 Nick Jonas knows he has a strong fanbase in the gay community and he embraces it.

The star of DirecTV’s upcoming series “Kingdom” talked about his love for his gay fans and how that may have even impacted the direction of the show a bit.

“I’ve always had a pretty strong gay fan base, having been a theater kid,” Jonas said during a HuffPost Live interview on Tuesday. He admitted that he’s “thrilled” to be a darling of the gay community, a status that seems to grow with every shirtless selfie and striptease he does.

He also recently stated that not only will he be naked in his new DirecTV series, there’s a possibility his character will also be gay or bisexual.

“I met with the [Kingdom] team and said, ‘Look, let’s do everything we can to embrace this part of my audience, because I love them,'” Jonas explained.

When asked about sex scenes, Jonas said that they don’t make him nervous. “What I realized so quickly was that it’s not real at all,” he said. “You just have to approach it with that mentality.”

As an example, he contorted his body into a position he was in while shooting an on-camera love scene, and then mimicked the stage direction he would get in the middle of the scene, asking him to move his leg back or something like that.

Jonas celebrated his 22nd birthday with a steak, courtesy of HuffPost Live, and with the release of his new music video for “Jealous.” Jonas stays fully dressed in the spot, which shifts from story to story through the screens on a stack of black-and-white televisions, but he makes up for it with some incredibly awkward green screen work.