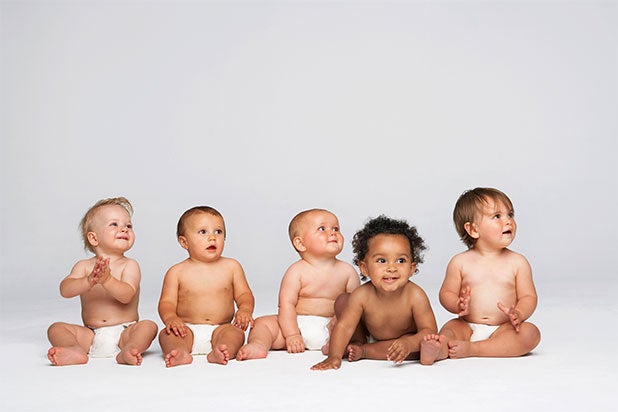 Netflix, Hulu, Amazon Prime and HBO are among the over-the-top (OTT) TV industry’s biggest players, but there are substantially more options available, as we discussed in last week’s post, and momentum is only growing.

As the chart below shows, 2015 was a blockbuster year for OTT TV platform launches, and in looking at the those large enough to make a splash, we saw 35 new services vying for consumer attention. 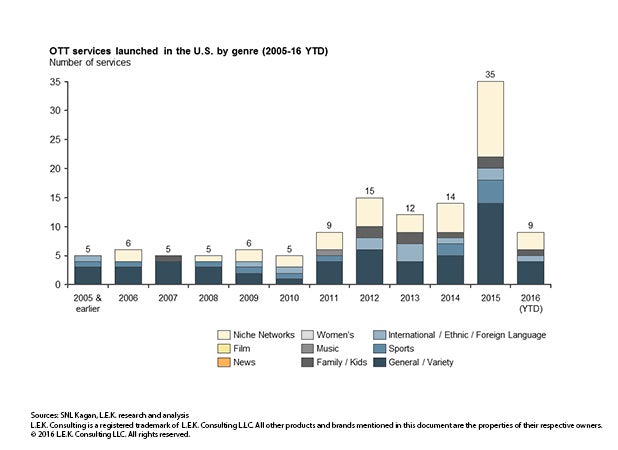 Of those 35 launches, 13 were general-interest OTT TV services. The other 19 focused on a particular audience. This was not accidental. Sometimes we watch whatever is on TV, but more often than not, we seek out content we really like.

This is why the number of channels available in the U.S. exploded in the mid-1990s and early 2000s. Programmers began focusing on a core audience rather than trying to be everything to everyone. Since then, the cost of launching new cable channels has increased, and OTT TV has emerged as a cheap way to access niche audiences.

As the chart below shows, OTT TV providers, as compared to traditional cable providers, focus their products on niche genres with a higher degree of specialization. 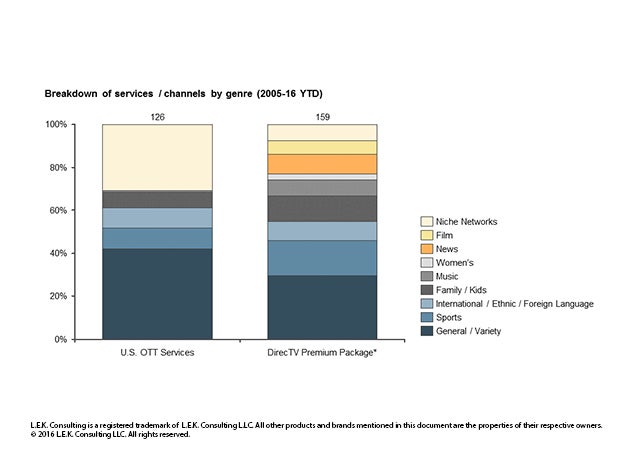 For example, Cartoon Network is a traditional cable provider that offers a slate of various types of cartoons, including some anime. But if you are really into anime, you should look to the niche market, where there are already three OTT TV service providers focused solely on serving the anime market.

Future OTT success is driven by how targeted the service is (how well it serves the needs of a niche) and how avid the fans of the niche are.

For example, WWE’s platform has already been a huge success (one million subscriptions in its first year), with sharp niche focus and avid fans. As you can see in the figure below, UFC has an acute niche focus and devoted audience, so it is likely only a matter of time before UFC’s platform has similar success. 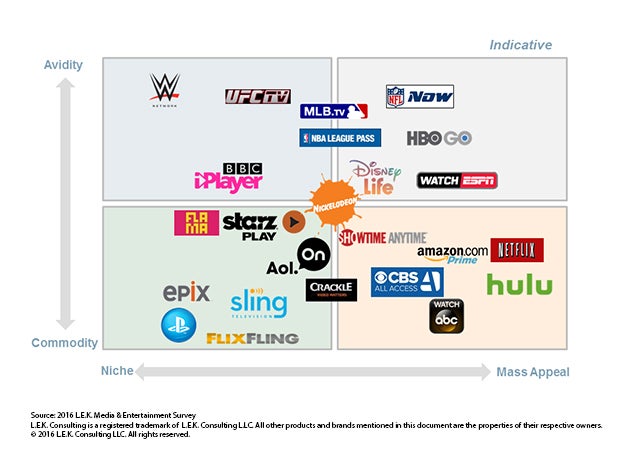 The red zone in the bottom right of the chart above represents a market that will be difficult for new OTT TV platforms to enter, given the wide availability and mass appeal of the existing offerings in this space. Of course, a deep-pocketed, media-rich asset could always try to make a move in the red zone, but the green zone in the top-left corner is where the opportunities really are.

Already in 2016, we’ve had some key OTT TV launches, including Seeso, Comic-Con HQ in conjunction with Lionsgate and the standalone Starz service. With a monthly fee of $4.99, Fullscreen’s subscription service focuses on the demographic that grew up with the social web (and this product looks very cool). And many others have announced upcoming OTT TV services (FilmStruck backed by Turner and several others).

In next week’s post, we will share our observations of dos and don’ts for launching OTT TV platforms.

This is Part 3 in a series on over-the-top (OTT) trends by Dan Schechter, Gil Moran and Francesco Di Ianni from L.E.K. Consulting’s Media & Entertainment consulting practice.