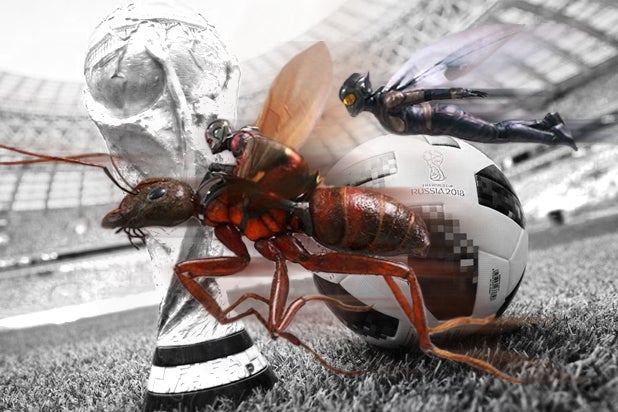 Next week, the FIFA World Cup will kick off in Russia and, inevitably, monopolize the attention of countless millions of soccer fans worldwide. So if you’re a Hollywood studio with a major summer blockbuster coming out over the next four weekends, how do you work around the biggest single-event sports competition in the world?

Universal and Disney have adopted differing release strategies for their respective “Jurassic World: Fallen Kingdom” and “Ant-Man and The Wasp” to deal with the singular World Cup challenge. Particularly in Europe, where several major markets have teams expected to make runs deep into the tournament. For Universal, that’s a large reason why “Fallen Kingdom” is being released this week in 48 countries, well before American audiences get to see it.

Duncan Clark, Universal’s head of international distribution, says Europe will get “Fallen Kingdom” two weeks ahead of the U.S. in order to give the film eight days in theaters before the World Cup kicks off. Eight of the countries in this first release wave will have teams competing in the Cup’s opening weekend, including defending champion Germany.

“The first couple of weeks there are games every day, but once you get to the playoff rounds the matches happen every three days or so,” he said. “Sometimes you have a matchup at that point between two major teams, but on the flipside you could have a top country in a match that isn’t a must-win or is against a nominal opponent.”

One territory that studios won’t have to worry about is South America. Even though Argentina and Brazil are perennial World Cup contenders, the time zone difference — the farthest-west part of Russia is 6 hours ahead of Brazil — means that those countries will be watching Neymar and Messi compete in the morning, well before primetime for movie theaters.

Disney, meanwhile, has two films that will be competing against the World Cup: “The Incredibles 2” and “Ant-Man and The Wasp.” For the Mouse House, working their release dates around Europe’s passion for footy is a simple repeat of the release strategy it used three years ago when the first “Ant-Man” hit theaters in July.

Back then, “Ant-Man” came out in the U.S. three weeks after Pixar’s “Inside Out,” a film that grossed $857 million worldwide. Disney always puts out summer Pixar films during weekends that coincide with kids in different countries being out on school break.

This meant that for “Ant-Man,” Disney had to treat the film differently than they do for most Marvel movies, where release dates are kept close together — in part to mitigate spoilers — and the film is released in the U.S. after a large suit of other countries. Instead, the U.S. was part of the first wave of release in mid-July, with 25 other countries getting “Ant-Man” in the following weeks.

So for “Ant-Man and The Wasp,” which will come out in the U.S. on the same weekend as the World Cup quarterfinals, Disney will stretch out the overseas dates to give Scott Lang some distance from “Incredibles 2.” Most notably, major soccer nations like France, Netherlands, Germany, the U.K., Spain, and Portugal will get the film after the World Cup final takes place on July 15.

Clark says that while the World Cup is always something that can’t be ignored when releasing summer flicks, the rapid popularity growth of sports over the past decade has given him and his peers plenty of experience dealing with it.

“For a long time now, we’ve been used to competing with sports events  as the broadcasting deals for the World Cup and the Olympics and other big sports have gotten bigger and bigger,” he said. “Two years ago, we were scheduling our films around the Olympics and the Euro Cup, and we did well with ‘The Secret Life of Pets.'”

“Sports have become so pervasive year-round, but they have a pretty fixed schedule and we know how to handle them.”