TheWrap magazine: Original writers Matthew Sklar and Chad Beguelin were tasked with creating “a celebratory, upbeat pop anthem for the women of the cast” in Ryan Murphy’s adaptation of their Broadway musical

A version of this story about “The Prom” first appeared in the Race Begins issue of TheWrap’s awards magazine.

When Ryan Murphy announced that he wanted to make a movie adaptation of the Broadway musical “The Prom,” that show’s songwriters, Matthew Sklar and Chad Beguelin, immediately began trying to figure out which of the show’s many musical numbers would be left out of the film. We were sitting around and trying to figure out, ‘Oh, that song won’t make it’ or ‘That one won’t make it,'” Sklar said. “So we were stunned when Ryan said, ‘No, we’re putting every single song in.'”

Not only did Murphy want to keep every existing song – some of them, they admit, trimmed for time – he wanted Sklar and Beguelin to add a couple of new songs to boot, including a number that would serve as a grand finale and end-credits song.

“Ryan said he wanted a celebratory, upbeat pop anthem for the women of the cast to sing,” Sklar said. “He wanted it to be a pop song but with theatrical flair, where you could sit in that feeling of joy that you have at the end of (the Broadway finale) ‘It’s Time to Dance’ for another three minutes.”

Also Read: Ryan Murphy on 'The Prom': 'The World Was Feeling Dark, I Wanted to Make Something Light'

The theater vets were used to that kind of task – “That’s our life, writing songs that fulfill those assignments,” Beguelin said – but in this case they also worked with two of Murphy’s regular songwriters, Adam Anders and Peer Astrom. It was a very long-distance collaboration: Anders was in Los Angeles, Astrom in Sweden, Sklar in New Jersey and Beguelin in the Hamptons outside New York City.

“Thank God for technology,” Sklar said. “Adam and Peer started with an idea for the hook, and they produced a track and presented it to Chad and me. And we took the verses and the bridge and we just went back and forth as a team. We kept saying, ‘What about this?’ until we really fine tuned it.” 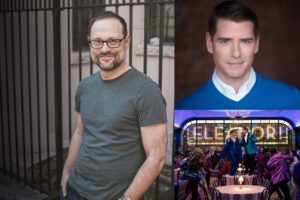 For lyricist Beguelin, part of that fine-tuning involved changing the title. “The two other writers wanted to call it ‘Turn It Out’ or something,” he said. “They were like, ‘It’s a pop song, it’s good to have general statements.’ And I kept thinking, ‘OK, how do I put this?’ Because one of the lyrics was ‘wear your crown,’ and I said, ‘For me, as a gay man, that’s your title: wear your crown, be proud.’ Then the lyrics became much more about how no one can take your pride unless you let them. It’s an empowerment song, not just a song about celebrating.”

The song also includes a rap delivered by none other than Meryl Streep. “I just wrote the rap and thought, ‘Oh, this is kind of fun, but it’s not going to happen,'” Beguelin said. “But I sent it to them anyway, and the email I got back was ‘Great!’ I said, ‘I was just kind of kidding around,’ and they said, ‘No, it’s in.’ And I believe it was Ryan’s idea to have Meryl do the rap, which was certainly a great surprise because now she can do everything.”

Sklar and Beguelin also wrote another new song for the movie, which appears in the credits after “Wear Your Crown.” (The placement makes it ineligible for Oscar consideration.) “We had written a song for James Corden’s character (a fading Broadway star) to sing in the film,” Sklar said. “It was Ryan’s idea – he wanted a song where James is singing to Kerry Washington and basically saying, ‘You’re going to lose your (gay) daughter if you don’t accept her.’ So we wrote this song called ‘Simply Love.’

“But the second part of the film was getting some pretty dramatic and heavy scenes, and it was starting to feel like that might be one beat too many. And as we were considering, this COVID came in and made up our minds for us. But James did record it and he sounds beautiful on it.”