I don’t want to oversell “How to Be Single” — it’s a romantic comedy that’s only intermittently funny, cobbling together more storylines and characters that it can bother to keep track of. At the same time, however, it’s a movie that at least occasionally bothers to zag instead of zig, avoiding the sort of pitfalls we’ve come to expect in films about unmarried young ladies on the prowl in the big city.

It’s based on a novel by Liz Tuccillo, and despite the rom-com clichés that the screenwriters have on their collective résumés — Abby Kohn and Marc Silverstein collaborated on “Valentine’s Day” and “He’s Just Not That Into You,” while Dana Fox is responsible for “Couples Retreat” and “What Happens in Vegas” — “How to Be Single” dares to reach the final reel without squeezing its quartet of heroines into gold bands and Vera Wang gowns. Better still, that some of them are still being single when the closing credits roll isn’t considered a fate worse than death.

See Video: Rebel Wilson Teaches Dakota Johnson About Dating in First Trailer for 'How to be Single'

Alice (Dakota Johnson) spent all four years at Wesleyan in a serious relationship with Josh (Nicolas Braun), but she thinks they need to spend some time as unattached adults before they make a lifelong commitment — what Alice’s wild new friend Robin (Rebel Wilson) calls a “sexual rumspringa.” Robin, who works at a stuffy law firm with Alice, trains her in such advanced areas of bachelor arts as never paying for drinks and not sending return texts too quickly to last night’s booty call.

The guy who helps Alice get her feet wet is the charming Tom (Anders Holm), who’s such an expert in remaining non-involved that he’s rigged his apartment to offer neither breakfast nor even a glass of water to the hungover young women who wake up in it. He begins to question his playboy philosophy when he finds himself smitten with the marriage-minded Lucy (Alison Brie), who lives upstairs from his bar and comes down just to use the free WiFi. 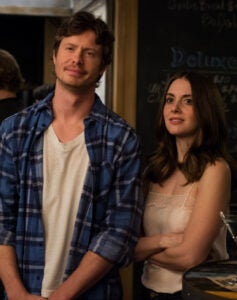 Lucy’s never integrated particularly well into Alice’s storyline, nor is Alice’s sister Meg (Leslie Mann), an OB/GYN who suddenly finds herself stricken with baby fever, and just as she’s in-vitro’d a child, along comes charming goofus Ken (Jake Lacy) to sweep her off her feet.

There are times when you feel like you’re watching an amalgam of rejected ideas from “Sex and the City,” “Lipstick Jungle,” “Cashmere Mafia” and any number of other shows about sexually-active women living in gorgeous apartments their characters couldn’t possibly afford.

Still, the script offers enough laughs to keep the movie from feeling completely disposable — one of Lucy’s fellas gives her the brilliant kiss-off, “Let’s only see other people” — and it outshines many of its genre peers through little touches like not punishing its female characters for enjoying sex and casting Damon Wayans Jr. (as a romantic interest for Alice) in a role in which his race is thoroughly irrelevant.

Even with all its flaws, “Single” provides screen time for a charming ensemble of actors. Johnson, who brought flashes of wit to “Fifty Shades of Grey” and who has been a dynamite “Saturday Night Live” host, reasserts herself as an empathetic actress and skilled comic player. Lacy — playing the diametric opposite of his “Obvious Child” character — and Mann have a lovely chemistry, and it’s always nice to see the amiable Braun, even though his role here is as straight and dull as the part in his character’s hair. Jason Mantzoukas (as a bookstore owner) and Wilson play variations of the roles we’re used to seeing from them, but they do them so well it would be churlish to complain about a reprise.

“How to Be Single” is clearly being offered up on a Valentine’s Day weekend as bait for groups of unattached female friends looking for a fun night out, and their enjoyment of what’s on offer here will probably correlate to how many margaritas they consumed beforehand. But even if they’re only occasionally amused, at least they’ll be spared the weird toxic anti-woman messages that so many films of this ilk tend to foist upon the unsuspecting. There are, cinematically speaking, worse ways to be.