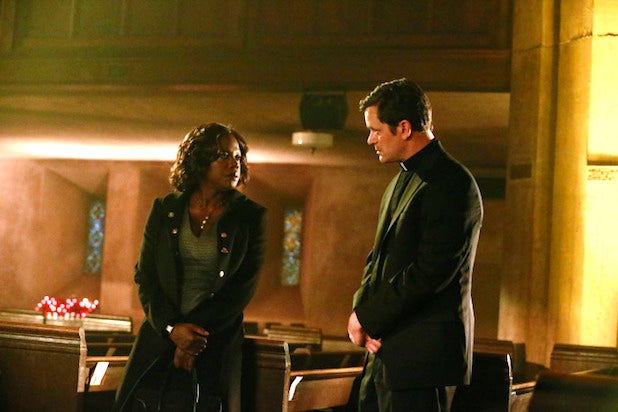 Fans of “How to Get Away With Murder” will finally find out who killed Lila during the show’s two-hour season finale on ABC Thursday.

“It was always my promise to flash back to the night of the murder,” creator Pete Nowalk told TheWrap. “My favorite part of the last two episodes are the last 10 minutes.”

As we’ve come to expect from the Shonda Rhimes-produced drama, Nowalk warns that the roller coaster ending will be jam-packed with twists and turns.

Also Read: ‘How to Get Away with Murder’ Star Cicely Tyson on the Unraveling of TV Daughter Annalise Keating

“You just have to pay close attention and not get too distracted because it goes by really fast. There are going to be several jaw-dropping moments,” said Nowalk.

In the first hour, Annalise Keating (Viola Davis) takes on the case of a priest (Tom Everett Scott) accused of murdering another priest. While there’s another case during the finale’s second hour, Norwalk would only reveal it’s “different than usual.”

But, it’s Sam’s murder that has Annalise struggling to stay focused. Not only is she complicit in her husband’s death — she’s also framed her lover, Nate (Billy Brown), for the crime.

Also Read: ‘How to Get Away With Murder’s’ Karla Souza Says Another Arrest in Sam’s Murder Is Imminent

“I think Annalise is really bearing the burden of what she did to Nate,” said Nowalk. “She’s going to try and figure out what the next step is and if there’s a way to help him while also having the students and herself get away with all the bad things they’ve done. It’s a very fine line she has to walk.”

Meanwhile, Connor (Jack Falahee) and Oliver (Conrad Ricamora) will take their relationship to the next level, after a drunk Oliver tells Connor those three dreaded words before passing out.

“I think Oliver said ‘I love you,’ a little too fast.” said Nowalk. “He probably wouldn’t have said that unless he was drunk. But I think that’s really how he feels about Connor.”

“I think they’re two sides of the same coin,” said Nowalk. “Annalise sees a very pure part of herself in Wes and I think Wes is becoming more and more like Annalise, and she kind of has to take him under her wing. I think that makes her sad that she’s taking this pure boy and corrupting him in the same way that she’s been corrupted through her life. “

Nowalk says Annalise and Wes will have some “big scenes” during the finale. “Their last scene together is very emotional and very powerful.”

See video: Watch ‘Extra’ Friday for TheWrap’s ‘Drinking With the Stars’ With ‘How to Get Away With Murder’ Stars

Watch some of Rhimes’ most outrageous moments of 2014 here.

“How to Get Away With Murder’s” season finale airs Thursday at 10 p.m. on ABC.