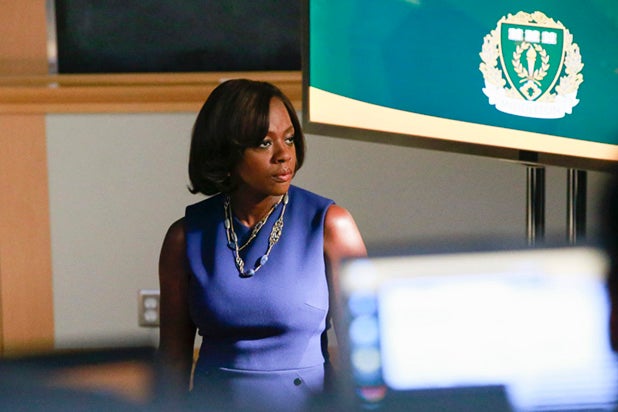 (Spoiler alert: Please do not read on if you haven’t watched Thursday’s premiere of “How to Get Away With Murder”)

“How to Get Away With Murder” returned for its second season Thursday night, and as promised, the identity of Rebecca’s killer was revealed before the premiere’s end.

After first suspecting both Frank and Wes, Annalise finally comes to the conclusion that it was Bonnie who put the poor girl’s head into a plastic bag and dragged her dead body under the stairs.

When confronted by Annalise, Bonnie claims that she did it to protect everyone. There’s no evidence that Rebecca wasn’t the one who killed Lila, and she was going to go to the police about the kidnapping. She was only going to cause more trouble. “She started all of this,” Bonnie tells Annalise. “And she’d have dragged us all down with her.”

But Annalise has a different theory: “You did it for Sam,” she spits, saying that Bonnie just doesn’t want to accept the fact that he was a killer. “And now you’re just as bad as him. Now that you’ve done this, you’re a monster. Just like him.”

The premiere also saw several new faces join the cast for the sophomore season. “The Vampire Diaries” vet Kendrick Sampson and Amy Okuda made their debut as adoptive siblings accused of torturing and killing their parents. Annalise becomes their lawyer after having their original representation kicked off the case, in what seems to be the beginning of a season-long arc.

Famke Janssen also made her first appearance as Eve, the death row attorney at the other end of the phone number Annalise slipped to Nate when he was stuck in prison last season. But the two lawyers are more than just colleagues, classmates or old friends. They were a couple before Annalise married Sam.

“I don’t sit here crying everyday thinking about how you left me for your therapist,” Eve says when Annalise, still reeling from her confrontation with Bonnie, stops by her apartment, crying about how she’s ruined all the people who come into her life. The two then share a kiss.

But the real shocker came at the end of the episode, when the new season’s main mystery was introduced. In a brief flash-forward, Wes is seen running away from the scene of a late-night shooting, while Annalise lies in a pool of blood on the floor.