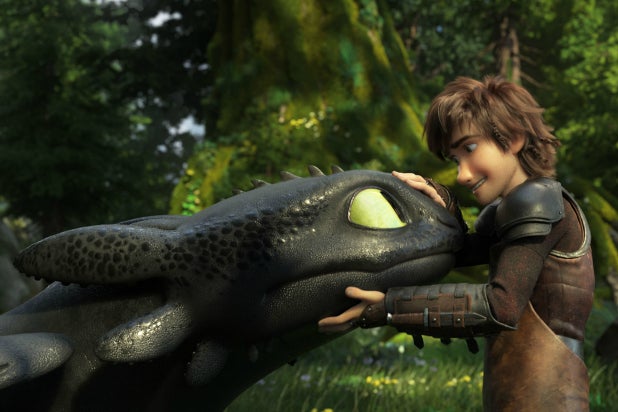 As much as we’d like the appearance of a threequel to mean, “Hey, here are all the cool ideas we couldn’t wedge into the first two,” the cold reality always starts with, “We think there’s more money to be made!” But sometimes, there are organically convincing extenders, and in the animation world, those exceptions include “Toy Story 3” — arguably that series’ crowning achievement — and now, “How to Train Your Dragon: The Hidden World,” writer-director Dean DeBlois’ delightful, gorgeous, and touchingly conclusive third adaptation of author Cressida Cowell’s fantastical universe of Vikings and fire-breathers.

That the third one doesn’t disappoint is hardly surprising, since over two movies so far, “Dragon” steward DeBlois’s enriching approach has been to treat the story of scrappy Viking scion Hiccup (voiced by Jay Baruchel) and his trusted dragon partner Toothless as a carefully seeded trilogy with the emotional contours of a coming-of-age epic. (The original “Star Wars” films and the work of Hayao Miyazaki were narrative inspirations.)

The first movie, released in 2010, was a boy-and-animal-friend story built on childhood wonder; the second (from 2014) told an adolescent adventure about maturation and legacy; the third, fusing the cute and the dark that has so far marked this franchise’s growth, makes for a satisfying exploration of the ways adulthood invariably means both new horizons and leaving some things, and some ways of thinking, behind.

Also Read: 'How to Train Your Dragon 3' Set to Breathe $45 Million of Box Office Fire

It gives “The Hidden World” the feeling of something in between an installment and a sequel, a kind of heartwarming drop-in on beloved characters and eye-popping creatures — fantastic beasts, indeed — plus a reviving tour of familiar environs, all with the promise that it’s all heading somewhere exciting and meaningful. In this case, it’s a story built around a long-assumed mythological realm at the edge of the world where dragons live in peace.

But for now, there’s plenty of change already on the island village of Berk which, under Hiccup’s young reign as chieftain, has been transformed from a quaint cliffside community into a colorful, if increasingly crowded haven for dragons and Vikings living together. Rescuing the flying, flame-spewing creatures from captivity is still foremost on Hiccup’s mind, thanks to the caring influence of his sanctuary-minded mother Valka (Cate Blanchett) and, of course, the considerable abilities of Toothless. But when it comes to turning his romantic relationship with Astrid (America Ferrara) — in every way an equal partner in ruling Berk — into something permanent, Hiccup’s name still suits him.

Also Read: DreamWorks Nabs Rights to Cressida Cowell's 'The Wizards of Once'

Two new figures — one enchanting, one menacing — are the catalysts to the friendship/leadership tests that comprise “The Hidden World.” The dazzling creature addition is something called a Light Fury, an alabaster-colored dragon (physically in the aerodynamic, feline Toothless mold) whose non-domesticated allure (she’s suspicious of humans) turns the normally intrepid Toothless into a hesitant suitor for her affections. It says something about the secret beating heart of these movies that as fun and exciting as the fire-and-flight battles are (like World War I dogfights juiced for the fantasy realm), this movie’s most memorable sequence is a wordless duet on a beach in which Toothless and the Light Fury humorously, and awkwardly, test their courtship as Hiccup observes like a proud, worried pal.

The new villain, meanwhile, is a long-faced, evil trapper named Grimmel the Grisly (a suitably snarly F. Murray Abraham), whose ultimate aim with dragons is either extinction or subjugation. His machinations — the series’ starkest representation yet of its anti-animal cruelty soul — push the characters toward discovering the titular utopia, which doesn’t disappoint as rendered by this movie’s accomplished team of designers and animators.

It’s one of the hallmarks of these movies that photorealistic beauty and otherworldly awe are so well meshed, never more so than in how the dragons are realized, forgoing Disney-fied anthropomorphism for a kind of non-human authenticity in movement and behavior that’s like a feature-length viral nature video, the kind where your default “aren’t they adorable” feelings are quickly dispelled by scary flashes of a creature’s survival instincts.

It means Toothless, his destiny now as essential to the saga’s as Hiccup’s, is as richly conceived a character as any of the humans, which include returning Vikings Eret (Kit Harrington) and Stoick (Gerard Butler) in flashback, and comic-relief figures Gobber (Craig Ferguson), Snotlout (Jonah Hill), Ruffnut (Kristen Wiig), Tuffnut (Justin Rupple replacing T.J. Miller), and Fishlegs (Christopher Mintz-Plasse). Their antics are, as ever, more hit-and-miss than consistently funny, but as humorous stitching between set pieces go, they at least never detract from the general thrust of this movie’s intelligently handled thematic concerns.

In fact, as DeBlois engineers this tale towards an expectedly exciting and poignant conclusion, one realizes how well that cleverly misdirecting title “How to Train Your Dragon” has morphed from literal to figurative, from being about command and obeisance to handling the turmoil within. Slapping a “3” after it wouldn’t have distinguished this soulful trilogy about growing up, and about the gift of empathy, nearly as well as a subtitle like “The Hidden World.”