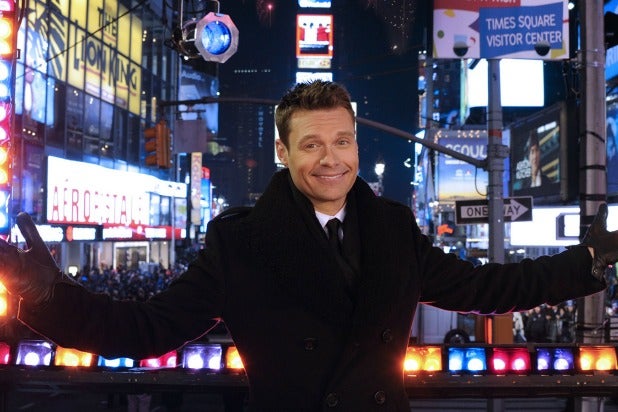 Another new year is nearly upon us, and ABC’s “Dick Clark’s New Year’s Rockin’ Eve” will again bring us the largest New Year’s Eve party on the planet.

Ryan Seacrest and Jenny McCarthy will host the Times Square portion of the festivities in New York beginning at 8 p.m. EST, and the party will continue until 1 a.m. But this “New Year’s Rockin’ Eve” won’t just stay in New York — this year’s edition will also feature parties in Los Angeles, hosted by Ciara, as well as festivities in New Orleans, which will be hosted by Lucy Hale.

All the locations will feature star-studded music performances, headlined by the return of Mariah Carey to the Time’s Square stage after her infamous performance a year ago. Camila Cabello, Nick Jonas and Sugarland will also perform in New York. New Orleans, meanwhile, will feature performances by Imagine Dragons and Walk the Moon.

Los Angeles, however, will be where the bulk of the musical festivities will occur, with a slate that includes BTS, Kane Brown, G-Eazy, Halsey, Fitz & The Tantrums, Khalid, Shawn Mendes, Hailee Steinfeld, Alessia Cara, Charlie Puth, Portugal, The Man, Zedd, Florida Georgia Line, Marshmello, Kelly Clarkson, Bebe Rexha and Watt. As a bonus, Britney Spears will also be performing live from Las Vegas.

All of this can be viewed either via a television service, streaming on ABC.com or via the ABC app on smart devices and streaming boxes of all sorts. If you’re in a market in which streaming television service Sling TV carries ABC, you can also sign up for a free 7-day trial and watch that way.

The broadcast won’t be continuous from 8 to 1, though — it will break at 11 p.m. for local news before returning at 11:30 to get ready for the turn of the calendar.

If you’re not in the mood for Ryan Seacrest, you’ll have many other New Year’s celebrations to watch, including Fox’s “New Year’s Eve with Steve Harvey” also from Times Square, “Feliz 2018!” on Univision featuring Pitbull, “New Year’s Eve Live with Anderson Cooper and Andy Cohen” on CNN, and Fox News’ “All-American New Year.” And let’s not forget, of course, the standard Times Square ball drop stream, which will include performances by Andy Grammer and Lauren Alaina, which you can stream for free.