Paramount’s new original horror movie, about a “Ring”-style curse that passes from one person to another and involves horribly violent deaths and – surprise! – a big wide grin on your face, is here, and it’s a huge hit. “Smile,” which stars Sosie Bacon and Kyle Gallner, is super creepy and unsettling and grossed over $200 million at the box office.

But how do you watch the new movie? Read on to find out:

Is “Smile” in theaters or streaming?

“Smile” was released exclusively in movie theaters on Sept. 30, and this is honestly probably a good thing, as its effectiveness is directly related to the amount of teenagers screaming and throwing their popcorn around you. This is a real matinee-at-the-mall movie, in the best possible way. That said, it’ll be streaming very soon…

When will “Smile” be streaming on Paramount+?

“Smile” will be streaming on Paramount+ starting Nov. 15, at which point in time it will also be available to rent or purchase on Digital if you don’t have a Paramount+ subscription.

When will “Smile” be on Blu-ray and DVD?

The film will be released on 4K Blu-ray, Blu-ray and DVD on Dec. 13 and includes the following bonus features: 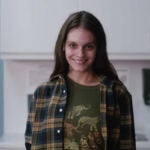 What is “Smile” about?

In “Smile,” Dr. Rose Cotter (Bacon), a clinical psychiatrist, witnesses a patient kill themselves in front of her. The patient slit their own throat, all the while smiling. She soon discovers that this death is part of a series of similar violent incidents, all involving smiling individuals. Can she figure out more about this curse (or whatever it is) before she ends up being the latest victim?

Who is in the “Smile” cast?

The cast, which is led by Bacon and Gallner (who had a brief role in “Scream” earlier this year), also includes Caitlin Stasey, Kal Penn, Rob Morgan, Jessie T. Usher (A-Train from “The Boys”) and Robin Weigert. It’s not the starriest cast, but everyone is very good.

Where are similar films streaming?

And 2001’s “Cure,” perhaps the “Citizen Kane” of this type of movie, is available on the Criterion Channel.

Other recent movies that “Smile” reminded me of were 2017’s “A Cure for Wellness” (available on all PVOD channels) and 2020’s “The Empty Man” (available on HBO Max, DirecTV and Cinemax) – both deeply brilliant and weirdly underseen supernatural shockers. 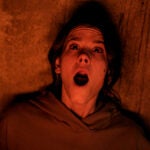