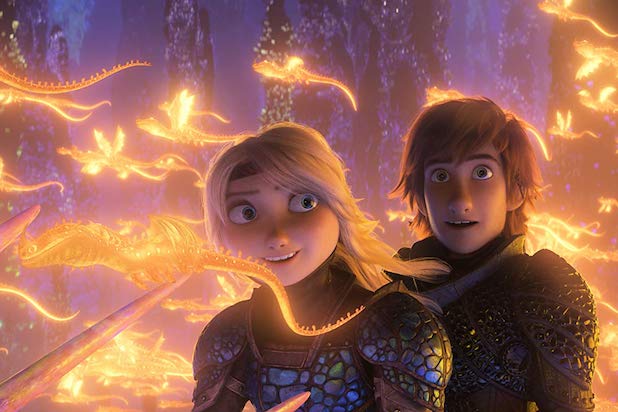 After a neck-and-neck Friday, Universal/DreamWorks Animation’s “How to Train Your Dragon: The Hidden World” has edged out Lionsgate’s “A Madea Family Funeral” to hold on to the No. 1 spot for another weekend.

Saturday matinees were robust for the “HTTYD” trilogy finale, as the film made $14 million on its second Saturday to raise weekend totals to an estimated $30 million. That’s just a 45 percent drop from the film’s $52.5 million opening, and a higher second weekend total than that of the past two installments in the “HTTYD” saga. The film now has a 1o-day total of $97.6 million.

“Hidden World” also held on to the top spot on the international charts, earning $52 million from 61 markets, including a $33.4 million opening in China. That’s the second-best ever start for a DreamWorks Animation or Universal animated release, and pushes the film’s global total to $375 million.

“A Madea Family Funeral” is in second with a higher-than-expected $27 million opening. The film was projected for an $18-20 million start, which would have ranked among the lowest in the Tyler Perry franchise. Instead, the film signifies a rebound from the $21.2 million opening made by the previous film in the franchise, “Boo 2!: A Madea Halloween.”

As usual, critics have panned this “Madea” film with a 25 percent Rotten Tomatoes score, while the devout franchise fans that show up on opening weekend have given the film an A- on CinemaScore. Audiences for the film were 67 percent female and 78 percent over 25.

Completing the top five is Universal/DreamWorks/Participant Media’s “Green Book,” which returned to 2,641 screens after winning Best Picture at the Oscars and earned $4.5 million in its 16th weekend in theaters. After opening to $5.5 million on Thanksgiving weekend, the film has legged out incredibly well and now has a domestic total of $75 million against a $23 million budget.

“Green Book” took the No. 5 spot from new Focus release “Greta,” which opened below tracker expectations with $4.5 million from 2,411 screens. The film has a 58 percent Rotten Tomatoes score and a C+ on CinemaScore.