With six nominations and one win between them, the members of U2 are no strangers to the Golden Globes. They’ll be back this year as nominees for “Winter,” the closing-credits song they wrote for Jim Sheridan’s movie “Brothers.”

The song may be a spare, atmospheric ballad, but the band and the director forged a relationship more than 30 years ago in Dublin’s punk-rock scene, when Sheridan was running a small Dublin theater where the fledgling band met their manager and launched a career that has worked out pretty well for them so far.

U2’s guitarist, the Edge, who’s also a central figure in Davis Guggenheim’s terrific rock doc “It Might Get Loud,” checked in with theWrap to talk about old pal Sheridan, writing for movies and being an outsider on Hollywood’s big nights. (Photo of U2 at the Oscars in 2004 by Art Streiber.) 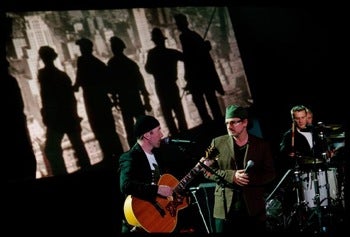 How did your relationship with Jim Sheridan begin?
Jim really started with the urban community theater scene in Dublin, with a center he co-founded called the Project Arts Center. It was a place for people who had interest in theater but no access to acting lessons or anything.

You know, the Abbey Theater was this rarefied kind of place where you went when you were a junior in high school to see Sean O’Casey, or maybe a Bernard Shaw play. Basically, it was a bit stuffy. But the Project Arts Center was a kind of radical, maybe left-leaning, community-based theater center.

And because it was a venue that was pretty much existing on a hand-to-mouth basis, they were always looking for ways to raise rent. So occasionally they’d do a rock ‘n’ roll show, and it was really one of the centers of the punk-rock scene in Dublin in the late ‘70s. It became Dublin’s version of CBGB’s, in a weird way. Jim was sort of running the place, and we played there a few times at the very beginning of our career as U2.

Did you stay in touch with him over the years?
Well, he left and came to New York and started making films. And we reconnected with him when he came back to Dublin after “My Left Foot.” And our friendship has grown since then. We really hang out a lot in Dublin – and Jim, being the character that he is, is always trying out ideas and film propositions on his friends to see what they think. So we’re used to sitting in the pub, and Jim will be pitching us some new script.

Is that how you heard about “Brothers”?
Yeah. Jim’s such a great storyteller, he can really hold an audience when he’s telling a tale. So we were immediately drawn in by what he was describing, and the way he wanted to make the film. And then he asked if we could consider doing a song for it.

I initially started working on a piece of music that we thought might end up working for the film. Then, as the film started to take shape, Jim played us a rough cut, and it was really at that point that we really got inspired and the song started to come together quite quickly. Bono wrote the lyric, I think, in a night. And then he did one rewrite, and that was basically the lyrics. 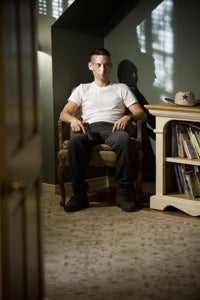 His lyric is obviously inspired by the film, particularly by Tobey Maguire’s character. What was the impetus for the song musically?
Well, when you’re writing for a movie you’re always trying to connect to the emotion of the characters. I was really thinking about the intense hidden emotion. It seemed like the secrets, what was not said, was the most important thing. And so that, I suppose, was a jumping off point, thematically.

If the lyrics happened quickly, did the music do the same?
No, it took quite a while. Initially, I had more of a conventional, straightforward arrangement, but it didn’t ever quite come together. It was too close to the U2 sound and U2 form. But in the studio, working with Brian [Eno], we started to work on a slightly different approach, which was more stripped down. And that eventually seemed to be the key to making the song work. I mean, I originally wrote it on piano. And when we went back to that instrument, it seemed to lock in and start to make sense.

At one point, wasn’t the song also slated for the “No Line on the Horizon” album?
We thought at one point that it might be really great for the film, and also for our album. But that, for various reasons, didn’t happen. The timing was really what messed us up. We were trying desperately to finish the song for Jim, because originally the film was coming out before the album. And at one point we even said, “Look, Jim, this song isn’t going to be ready for you, so why don’t you think about this other tune?” Then his film got delayed, and we were able to regroup and get it together for the film. And in some ways, though it’s a beautiful tune, it doesn’t quite fit on our record thematically.

What was the other song you were going to give him?
It was a song called “White as Snow.” It also was inspired by the film, but I think “Winter” is a better fit.

I remember talking to Bono at Oscar rehearsals back in 2004, and he was clearly uneasy with the whole experience of appearing on that show.
Well, when you’re at the Academy Awards or the Golden Globes, you sort of feel like you’re at somebody else’s party. Which is fine, and we’re very honored and happy to be there. But it’s a different thing. You know, the music equivalent, the Grammys or the Rock and Roll Hall of Fame, are very loose affairs. The Academy Awards is very serious. People aren’t messing around. You’re dealing with some high-octane star power, and performers that are used to holding an entire audience. But it’s always great to see things on the other side of the fence, and get a feel how the other part of the business works.

“It Might Get Loud” didn’t make the Academy’s documentary shortlist, but I notice that “Fly Farm Blues,” the song that Jack White makes up on the spot while the cameras are rolling on that film, is on the list of Oscar-eligible songs the Academy just released.
Oh, that’s great!

So if we can get both U2 and Jack White nominated, that’d make for a hell of an Oscar show.
That would be great. I’d love that.