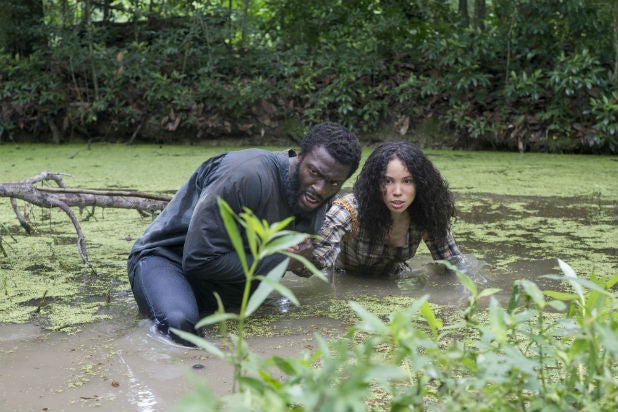 2016 is shaping up to be a banner year for WGN America, thanks in large part to its new drama “Underground.”

The series, which focuses on a group of slaves in the pre-Civil War South who decide to make the perilous journey North, is outpacing WGN America’s 2015-2016 primetime average by 508 percent in total viewers and 1,005 percent among adults 18-49 in live-plus-seven viewing.

In live-plus-same day, the show is no slouch either. After seven episodes, it is averaging just over 1 million viewers per episode and a 0.31 rating in the key demo, with the premiere drawing 1.4 million viewers and a 0.39 rating. And “Underground” is not alone on the network.

Fellow freshman series “Outsiders” also performed well in the ratings. That show managed to draw an average of 822,000 viewers and a 0.29 rating over 13 episodes in live-plus-same day with the finale airing April 19. While not off the charts, compare that to other new shows on well established cable networks.

HBO’s 70’s music drama “Vinyl” closed out its freshman season averaging just 645,000 viewers and a 0.22 rating. Showtime’s “Billions,” set in the world of high finance, averaged 1.1 million viewers and a 0.33 rating for its first season.

So, barring a sudden drop off in the ratings,”Underground” is in pretty good shape, especially considering the show is just the fourth original show to debut on WGN America. So what is that is drawing fans to series?

For starters, other than “Roots,” which was a miniseries, no other scripted U.S. television show has focused on slavery, let alone the Underground Railroad.

“I’m not aware of any other show with that central storyline,” Dr. Darnell Hunt, Director of UCLA’s Ralph J. Bunche Center for African American Studies, told TheWrap in March. “I’m aware of shows where that theme may have occupied an episode or two … So this I think, with the exception of ‘Roots’ — which explored a different aspect of slavery — is rather unique.”

The show also comes along at a pivotal time, as questions of diversity and inclusion on television continue to pop up.

“Currently, the American public is about 40 percent minority and that’s increasing by about half a percent every year,” Hunt said. “So the simple fact is the audience is very diverse and people want to see their own stories and experiences reflected on screen. So it stands to reason that a diverse audience wants to see diverse content.”

“Underground” airs on Wednesdays at 10 p.m./9c on WGN America.