What does Banana Republic have to do with the future of narrative virtual reality filmmaking? Maybe more than you think.

Narrative virtual reality filmmaking is just starting to come into focus, with major studios and entertainment companies getting on board. VR company Within and Fox’s new VR division, FoxNext, are partnering with Annapurna Pictures on an original VR film with the working title “I Remember You,” which was developed with award-winning director Spike Jonze, and VR was a major factor at this year’s Sundance Film Festival, where Within premiered “Life Of Us.”

Like plenty of their Hollywood counterparts, many virtual reality filmmakers started out doing commercials. The difference is, they were doing that because narrative VR filmmaking didn’t really exist yet. Now that it’s here, VR filmmakers like Annie Lukowski and BJ Schwartz of VR production company Vanishing Point Media, who have developed experiences for commercial clients like Banana Republic, Teen Vogue and “Jimmy Kimmel Live,” have taken those lessons to the narrative space they’ve always wanted to target.

At the beginning, the lack of real VR narrative material on the market made it hard to find examples to help aspiring narrative filmmakers like Lukowski and Schwartz learn how to navigate the new medium. There was, however, branded content.

“I think there was one Volvo commercial that was in VR,” Lukowski told TheWrap. “We watched it 30 times.”

Hollywood is now starting to dedicate serious resources to VR, but the relatively limited adoption of the technology at this point (how many people do you know with an Oculus Rift?) means that Vanishing Point has found more business doing commercials than narrative films.

“It just so happened that there’s not that many headsets out there,” Lukowski said. “To justify a whole budget for a narrative piece when you know there’s not going to be that many eyeballs is tough. Mostly when people come to us and ask us to do stuff, it’s commercials.”

Taylor Freeman, a co-founder of Upload, a virtual reality-focused incubator and media company, credits brands for providing a platform for early-stage VR filmmakers to start to figure things out.

“I think we’re seeing a lot of innovation coming from this experiential marketing,” Freeman told TheWrap. “Brands pouring this money into the space has really enabled the content creators to take time to learn.”

Within’s Chief Operating Officer Drew Larner told TheWrap virtual reality is “challenging for Hollywood right now” because the monetization isn’t there yet, which is why brands have been out front in terms of funding.

But those commercial experiences helped filmmakers like Lukowski and Schwartz become sort of accidental pioneers in a field that’s still very much in a nascent stage. They’ve also applied plenty of techniques learned through trial and error to VR narrative filmmaking.

“All of this is teaching us,” Lukowski said. “It’s a new technology on the capture side, on the visual effects side and mostly on the distribution side. People don’t know what VR is and don’t know what the storytelling is. But it’s right around the corner.” 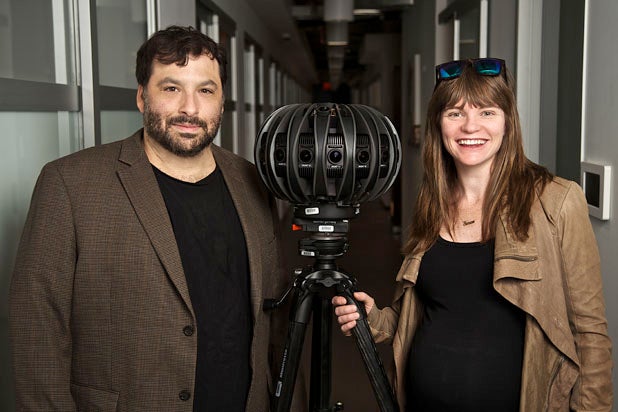 One thing VR filmmakers can’t do is put cameras pretty much anywhere they want to set up artistic shots. To make virtual reality work, the camera has to have a much more restricted footprint.

“You can’t just put the camera anywhere,” Lukowski said. “You have this six-foot window to dance. You can’t go closer than two feet for mono (audio) or three-and-a-half feet or stereo and further than nine for resolution.”

There’s also the fact that virtual reality creates this different sense of intimacy that offers a whole new way to directly connect with viewers, but can be overwhelming — and as anyone who has experienced some of the darker VR games can attest — even intimidating.

“You’re in a place that you could never be in, but it feels like you’re there,” Schwartz said. “There’s nothing [in traditional filmmaking] for giving that sense of empathy. If you put a camera in Aleppo, even though it’s thousands of miles away, it’s really hard to divorce yourself. I don’t think there’s any filmic experience that’s quite as powerful as that ‘turn and look at you.'”

Despite the vastly different technological requirements, there are plenty of threads that tie VR filmmaking to traditional movies, Lukowski and Schwartz said.

“What translates from traditional filmmaking really surprises you,” Lukowski said. “You can edit, for example. But it’s a different tool with different things to do.”

Also Read: 7 Signs Augmented and Virtual Reality Are Ready for the Masses in 2017

Freeman said he’s noticed VR filmmaking turning a corner from novelty branded experiences to something that resembles narrative content viewers would want to pay for.

“We’ve seen a shift from the early experimental phase,” he said. “That stuff has sort of faded away and now people are much more focused on creating high-value content.”

And sometimes, all it takes is one piece of that high-value content to turn a new technology into a household name.

“Nobody really knew what a podcast was in middle America until ‘Serial’ happened,” Schwartz said.