At the behest of Hugh Grant, the zanny tunes of “The Benny Hill Show” theme are now providing the soundtrack to Britain’s three-ring-circus political crisis.

Prime Minister Boris Johnson has stated he will resign following the departures and firings of numerous government figures — over 50 people, including four Cabinet members in just two days — amid several political scandals, like “partygate.”

In a tweet to activist Steve Bray yesterday, Grant said, “Morning @snb19692 Glad you have your speakers back. Do you by any chance have the Benny Hill music to hand?” 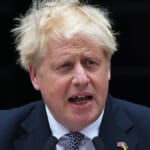 Naturally, Bray was happy to oblige, tweeting a video of folks dancing to the blasting clownish track associated with the British slapstick sketch show outside of the Westminster Palace. “Just for @HackedOffHugh as requested here today at the media circus,” he wrote with the accompanying video.

And thus, the protesters inadvertently provided the background music for Tories’ interviews with the press. “Firstly, we need to make sure we get the basic functions of government going,” one Conservative party member began in his interview with Sky News while being clearly drowned out by the hilarious buffoonery of “Yakety Sax.” As if we needed another reason to acknowledge Grant’s storied comedic timing.

At its height, “The Benny Hill Show” was the most-watched program in the U.K. in the early 1970s. Running from 1955 to 1989, it earned its star a BAFTA Television Award for Best Writer and was nominated for an Emmy for Outstanding Variety.

Grant is best known as a king of rom-coms, starring in “Love, Actually” (in which he coincidentally plays a British PM), “Notting Hill,” “Bridget Jones’s Diary” and “Four Weddings and a Funeral.” He was most recently in HBO Max’s “The Undoing” opposite Nicole Kidman. 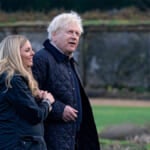