Nobody’s more committed to singing for his supper than Hugh Jackman, but the “Prisoners” star’s global charm offensive took an extreme turn this weekend when he showed up in the exotic, hard-to-reach location of … Iowa Falls, Iowa.

And like, spent a bunch of time there. With his wife and kids even.

“I’ve never had my family with me on one of these. But it felt right here,” Jackman said, according to the Waterloo-Cedar Falls Courier.

Clan Jackman was deep in far-flung flyover Saturday for the reopening of the historic Metropolitan Theater, which agent Patrick Whitesell‘s father has rescued from oblivion. Though they weren’t expected until the evening event, the Jackmans arrived in early afternoon, and went fishing at a city park before greeting hundreds outside the newly refurbished 114-year-old movie theater.

According to the Courier – whose other top story Sunday was “Area Grower Reports Record-Sized Melons” – people kept asking Jackman how Whitesell convinced him to come to Iowa Falls, located hundreds of miles from civilization (see map, below).

Warning: His answer may shock you. 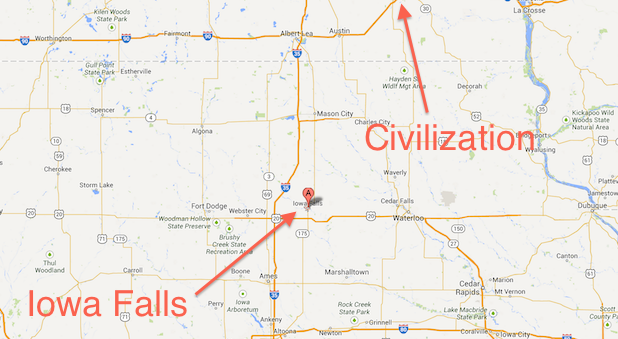 “It was my idea,” Jackman responded. “I just love the story.”

The story is this: Whitesell’s father Jack pulled the landmark theater out of bankruptcy, then spent half a million dollars renovating it. The native son said he wouldn’t be in the entertainment business were it not for the structure, built as an opera house in 1889 (now it boasts two brand-new digital screens).

“When a town loses its theater, that’s a blow,” he told the Courier. “I couldn’t see that happen, not in my town.”

The theater played “Prisoners” on one screen, “The Wolverine” on the other.

Also read: Hugh Jackman Is ‘a Monster’ in ‘The Wolverine’ (Video)

With hundreds of locals lined up to catch a glimpse before the show, Jackman sang briefly with a local cover band called the Mudpuppies – and even did a few bars from “Les Miserables.”

And then he left the locals with a instructions they will be compelled to follow for the next 114 years: “Come to Iowa Falls to the theater … at least once a week.”