“Prisoners” grossed an estimated $9 million on Saturday, a 29 percent jump from the day before that has studios projecting a $21 million weekend for the Warner Bros. release — and all signs point to long legs for Denis Villeneuve‘s dark thriller starring Hugh Jackman and Jake Gyllenhaal.

The mid-weekend surge was more than enough for “Prisoners” to take the box office crown its debut, beating out “Insidious: Chapter 2.” The horror holdover, which opened last weekend to a stunning $40 million, dropped 64 percent (as genre films tend to do) for $14.5 million.

“Prisoners” also secured the second-biggest opening weekend in the history of Alcon Entertainment, which financed the film and has an output deal with Warner Bros.

“It’s a great weekend for Warner Bros and an exceptional weekend for Alcon,” Warner Bros. domestic distribution chief Dan Fellman told TheWrap. “You look at the movies and the CinemaScore and all the stars are lining up. It looks like we’ll have a long and healthy run with this.”

Also read: Hugh Jackman on Fighting a Guy While Rollerblading: ‘I Was a Wanker’ (Video)

Fellman noted that the movie’s opening is comparable to several other recent R-rated fall releases, including “Looper” and the studio’s own “Argo.” Both of those movies grossed more than $100 million worldwide (with “Argo” topping $200 million).

“Prisoners” stars Jackman as a father whose daughter is kidnapped along with her friend; he makes a hostage of the man he believes is responsible (Paul Dano). Though some analysts expressed concern that the movie’s dark subject matter and long running time would inhibit its financial performance, audiences embraced the movie as the weekend progressed.

The movie’s CinemaScore rating grew from a B+ to an A- by Saturday, echoing the largely stellar reviews from critics.

“The most encouraging thing looking at the future of the movie is that 74 percent of its audience is under 50 and they gave it an A-,” Fellman said. “That sets it up for you.” The only competition next weekend is Sony’s “Cloudy with a Chance of Meatballs 2,” which appeals to a much younger demographic than “Prisoners.”

Also read: Jake Gyllenhaal, Hugh Jackman and ‘Prisoners’ Cast: Who Would They Want to Be Held Captive With? (Video)

Most of the movies in wide release had a strong Saturday, none more so than “Instructions Not Included,” the Liosngate/Panitleon movie that grossed 40- 50 percent more this Saturday than the one prior. It is now on track for around $5.5 million, an increase from last week and good enough for a fourth place finish.

That places it ahead of “Battle of the Year,” the only other movie besides “Prisoners” opening in wide releases this weekend. Starring Josh Holloway and Chris Brown and about an international dance crew tournament, the film jumped 45 percent on Saturday but may still gross less than $5 million for the weekend.

A 3D re-release of “Wizard of Oz” should top $3 million on just 318 screens while “Rush,” which Universal opened in limited release, is on track for $200,000 from five screens. Universal decided to start small with “Rush” to build buzz based on the film’s exceptional reviews. Though its box office figure is less than what many had expected, it was a soft weekend at the box office. 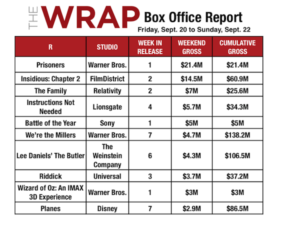