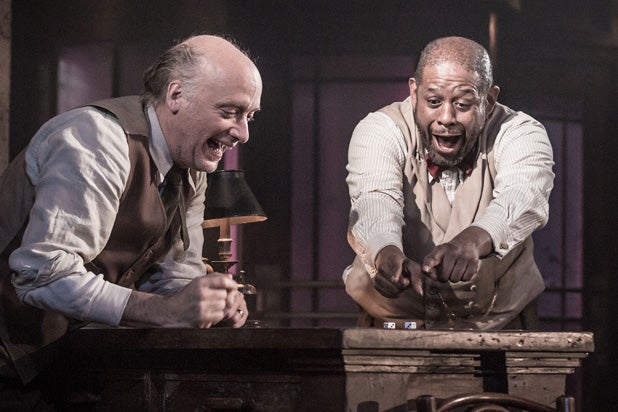 Let’s call it “Nightclerks.” It’s the best painting that Edward Hopper never painted, and you can see it at Broadway’s Booth Theatre in the new revival of “Hughie,” which opened Thursday.

No one captured urban isolation on canvas better than Hopper, and if he’d ever decided to paint the inside of a once elegant, now slightly crumbling lobby of a hotel in Times Square, placing a faceless clerk alone behind the counter, this “Hughie” as designed by Christopher Oram and directed by Michael Grandage would be it.

Of course, the clerk (Frank Wood) must be bald. The elevator and its cage, as well as the grand staircase, must look as though they haven’t been used in years. And most important, the neon sign outside must be green, that same alluring yet toxic green that bathes so many of Hopper’s nighttime cityscapes. Lighting designer Neil Austin applies Hopper green liberally throughout the show, signaling not so much changes in the day as the gradual ebbs and flows of an otherwise stagnate life.

Wood is on stage from the moment you enter the Booth Theatre. Since this one-act play by Eugene O’Neill is only 60 minutes long, it’s recommended you get your money’s worth, come early, and contemplate on stage the greatest painting Hopper never painted. The tableau is better than Hopper’s “Hotel Lobby,” and right up there with his “Automat” and “Nighthawks.”

Wood plays the Night Clerk, who has replaced the previous clerk, named Hughie, who died not long ago. Hughie’s death sent Erie Smith (Forest Whitaker in his Broadway debut) on a bender, and the play begins when he returns home to the hotel to meet the new clerk for the first time. Hughie was Erie’s lifeline, the one constant in his world of gambling, drinking, and whoring around. Hughie also reinforced every Broadway-hotshot illusion Erie had about himself. Without a night clerk there to buck him up, life for Erie would be unbearable.

In between Erie’s many monologues, Grandage interjects speechless longueurs in which the actor either sits or stands around with nothing to do as shades of green sweep over him like waves of smog. What Erie doesn’t do is take the stairs or the elevator to escape to his room.

On stage, Whitaker’s voice is much higher pitched than in the movies. Or it seems that way, perhaps because on stage we always hear his tenor coming from such a large man and not just a disembodied face in close-up. Whitaker uses that contrast in sound and appearance to superb effect, giving a whimsical edge to the character. “Whimsical” is not a word one uses very much to describe an O’Neill character. Whitaker delivers a most endearing Erie, right down to the nervous giggle he adds to punctuate the character’s otherwise bottomless despair. It’s a sign he’s still living.