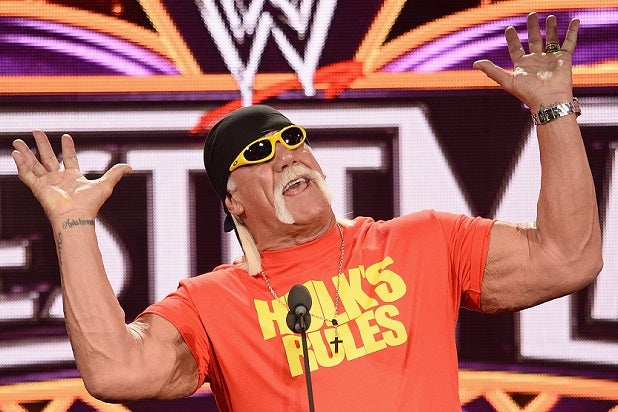 Hulk Hogan was officially welcomed back with open pythons — err, arms — by WWE on Friday at Saudi Arabia’s “Crown Jewel” pay-per-view event. The WWE Universe on Twitter seemed to have a less-accommodating response to the booking.

Below are some of the choice negative reactions.

To be fair, not everyone on the social media website was unhappy to see Terry Bollea back in the red-and-yellow — it just kind of felt that way when we looked around.

The irony of Hulk Hogan’s Real American theme blaring to open WWE #CrownJewel in Saudi Arabia is… somewhere between hilarious and appalling.

So the WWE is bringing out blatant white supremacist Hulk Hogan. I guess they want to make money from all the anti-Black WWE fans.

Crown Jewel is being used as propaganda for the Saudi government and is hosted by Hulk Hogan. We are on Chris Benoit memorial statue away from a Devil’s Triangle #WWECrownJewel

Wait you're saying Hulk Hogan is right now providing positive P.R. and cover for a power-crazed billionaire who'll stop at nothing to silence his critics

hulk hogan is what i imagine candy corn would turn into if u injected with steroids and taught it racism pic.twitter.com/yGlm8K6TND

Even if we've literally expected it for 6 months, the idea that Hulk Hogan is officially returning to WWE from N-word tape-induced exile on a highly controversial & widely reviled Saudi propaganda show that John Cena & Daniel Bryan are refusing to work on is completely bonkers.

And then there is this one, mocking WWE’s announcers for hyping the return of “The Immortal Hulk Hogan”: 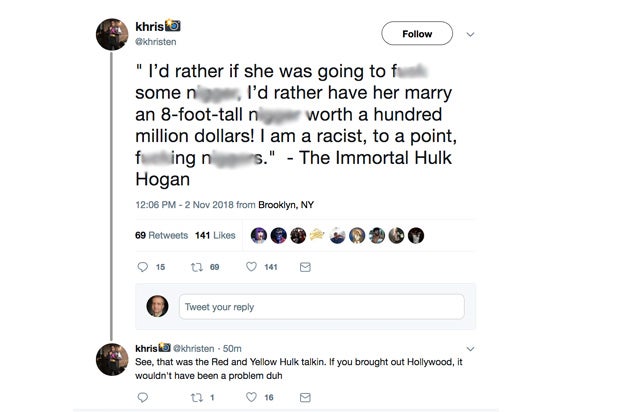 Yes, that was actually something Hogan said about his daughter Brooke dating a black guy.

Hogan, whose real name is Terry Bollea, was booted from WWE after video of him using the N-word surfaced in 2015.

He was reinstated with the organization in June 2018. Hogan apologized to the locker room at the time.

Hiring Hogan to host “Crown Jewel” was certainly not the lone controversy surrounding the middle-eastern event.

On Oct. 11, a spokesman for the professional wrestling promotion told TheWrap that they are “currently monitoring the situation” in Saudi Arabia. The brief statement was WWE’s first acknowledgment of the circumstances surrounding deceased Washington Post columnist Jamal Khashoggi, a Saudi Arabia native who had been critical of the country’s royal regime. U.S. and Turkish officials both believed that Khashoggi may have been murdered by his own government, or that he was killed with Saudi Crown Prince Mohammed bin Salman’s knowledge. At the time, Khashoggi had been missing for more than a week after going to the Saudi consulate in Istanbul to obtain wedding papers.

Saudi officials now acknowledge his murder and have admitted that it was possibly premeditated. As the news of the horror progressed, it became less likely that WWE would go ahead with event in Saudi Arabia.

“Crown Jewel” is the latest in WWE’s massive push into expansion in the oil-rich nation. Today’s event follows April’s “Greatest Royal Rumble” event, which took place at the King Abdullah Sports City Stadium in the Saudi city of Jeddah.