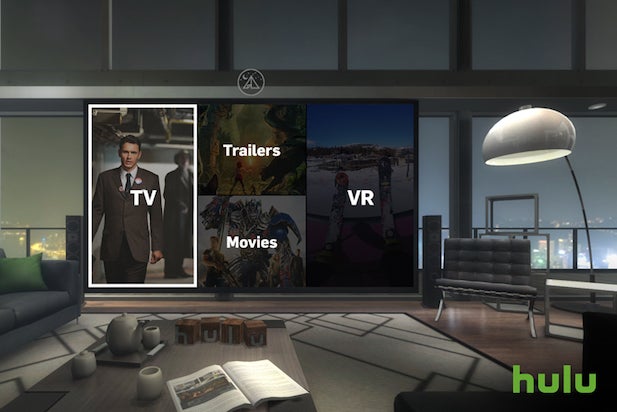 Streaming site Hulu launched its virtual-reality app and debuted its first VR original content on Thursday, months after its original plan for a launch last fall.

Like the VR app from bigger rival Netflix, the Hulu app allows viewers to watch its standard catalog of regular shows and movies in Samsung’s Gear VR headset.

The Hulu app creates a computer-generated “living room” for viewers to glance at while the traditional content streams.

But unlike its bigger rival, Hulu also released original virtual-reality programing as well, including short film, “The Big One,” created by YouTube star Freddie Wong’s RocketJump team and Lionsgate. The movie depicts a meteor shower turning into an “apocalyptic nightmare.”

Virtual reality, an entertainment and communication format that makes viewers feel like they’re in the middle of the action, is approaching its best shot at mainstream awareness this year, with a slew of companies bringing headsets to market.

Samsung will bundle one of its Gear VR headsets with every new generation Galaxy smartphone it sells, and Facebook’s Oculus, device maker HTC and Sony’s gaming business Playstation are all shipping long-anticipated high-end headsets this year.

“We are at the very beginning of VR and like everyone involved in VR technology and content, we at Hulu, have a lot of learn about what makes for a great VR experience in the eyes of the viewer,” Hulu’s head of experience, Ben Smith, said in a post announcing the app release.