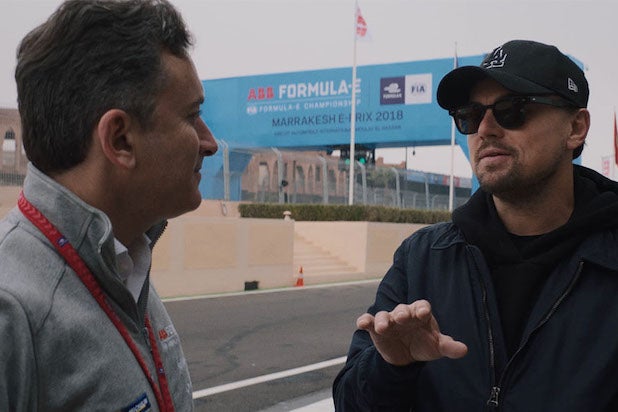 Hulu has acquired the U.S. streaming rights to “And We Go Green” a documentary produced by Leonardo DiCaprio’s Appian Way about the rise of Formula E electric car racing and how it is making an impact against global warming and air pollution.

“And We Go Green” premiered at Cannes in 2019 and also played TIFF last fall, and it will now stream on Hulu beginning on June 4.

Oscar winner Fisher Stevens, who directed the 2016 climate change film “Before the Flood” also produced by DiCaprio and Malcolm Venville (“44 Inch Chest) co-directed “And We Go Green.” DiCaprio and Jennifer Davisson produced under the Appian Way banner along with RadicalMedia and Bloomfish Productions.

“And We Go Green” provides a behind-the-scenes look at the ABB FIA Formula E Championship and chronicles how the groundbreaking series has become the world’s fastest growing motorsport since its inception in 2014. Offering captivating and suspenseful racing footage interwoven with candid interviews from reigning champion Jean-Eric Vergne, former Formula E driver Nelson Piquet Jr., and current stars Sam Bird, Lucas di Grassi and André Lotterer. The film follows the professional drivers on the international Formula E circuit as they race for victory across 10 major cities to contest the 2017/18 season.

“Now this film is more relevant than ever. As people have been quarantining in their homes, we can see what the world can look like without so much carbon being pumped into the air, and the planet is coming back to life,” Stevens and Venville said in a statement. “In making our film, we realized the best way to get the world to pay attention to climate change is to make a film about people — in this case, race car drivers and an upstart with a vision to change motorsport forever. This was an incredibly inspiring and thrilling film to make, and we hope the whole world starts to go electric.”

“The documentary encapsulates the true mission and purpose of the ABB FIA Formula E Championship, to show how competition drives technological development and how the excitement of sport can have a meaningful social impact and alter perceptions of electric vehicles. This notion is how the title ‘And We Go Green’ came about. Not only does it signal the start of our races, but it also indicates an urgent need to put the brakes on devastating and irreparable damage already caused by fossil fuels. I’m proud to have worked with such great talent and a production team who share the same common values around sustainability and making a positive impact in the fight against climate change,” Formula E founder and chairman Alejandro Agag, who also appears in the film, said in a statement.

“We’re thrilled this film is being distributed on the Hulu platform, as they’ve proven to be committed to not only premium nonfiction storytelling, but a worthwhile cause to boot. It’s time for the world to embrace alternatives to the fossil fuel dilemma and to think ahead of ourselves in terms of a more positive future. ‘And We Go Green’ paves the way,” RadicalMedia CEO Jon Kamen said in a statement.