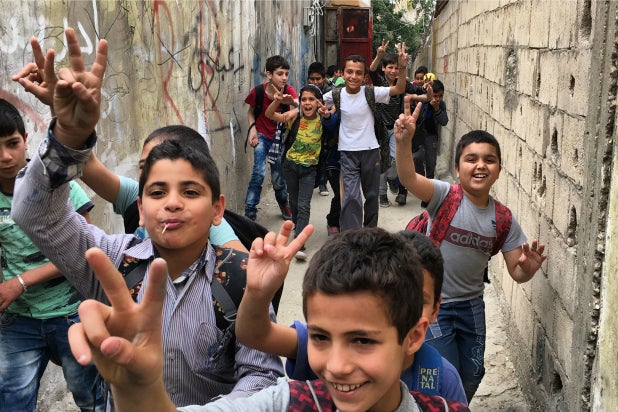 The enormity of Ai Weiwei’s “Human Flow” couldn’t be clearer; its scale is suggested in the title itself. Ai’s subject is the refugee crisis, and his stage seems to be the entire planet. He sees this issue as a universal calamity, and backs up his belief by pulling us, urgently, all across the world.

Over the course of 140 minutes we travel to 23 countries, from Afghanistan to the United States. Many of the situations he documents have been well-covered in recent years, like the provisional refugee camp outside of Calais, France; the permeability of the U.S. border; and the controversy over Germany’s “open door” policy. But he’s equally interested in the legal options for asylum in Sweden and the risks of human trafficking among refugees in Thailand.

Ai often takes an overhead view, showing us rivers of people marching towards … well, that’s the crux of the problem. Everyone in those seemingly endless lines is intimately familiar with the places they’re escaping, and the terrible reasons why they had to leave. Their destinations, however, are still painfully nebulous. And the eventual reality rarely matches up with their desperate dreams.

Ai has so much conviction in the power of this global tragedy that he’s structured “Human Flow” as an intermittently silent film. What could be said that would be more effective than the images with which he confronts us?

He does introduce each chapter with brief lines of poetry, but in these settings, few words carry the weight of the sights we view with dismaying regularity.

It should be said that we meet some rare individuals, including aid workers, activists, academics, and politicians, who have dedicated their lives to helping refugees. But the common denominators in every country are more often ominous and repetitive. Waiting at the end of each trail are barbed-wire fences, stern-faced guards toting machine guns, and national populations outraged by the very idea of asylum-seekers.

These are the moments when Ai swoops to the ground, homing in on the people within the masses. The women in tattered tent cities, waiting in impossibly long lines for food as rain pours down on their heads. The men tearfully ticking off the names of relatives already lost to a devastating ocean crossing. And the children — so many children — playing in the mud, laughing at the camera, hiding behind their frustrated, angry, terrified, grieving parents.

As one of China’s, and the world’s, most famous artists, Ai has a freedom today that his subjects lack. He currently lives in Berlin, and has been in New York this month presenting his city-wide, immigration-oriented installation, “Good Fences Make Good Neighbors.” But he himself was jailed as a dissident by his own government, and his passport was rescinded from 2011 to 2015.

Both his privileges and his persecutions seem to inform the gentle empathy he brings to the refugees he briefly meets on camera. Because of the project’s scope, though, we don’t get to know any individuals as well as we might like.

Instead, Ai is intent on contrasting the intimate with the intimidating. The sheer mass, the never-ending flow, threatens to overwhelm us. And that, one suspects, is the decisive point of a film that is, characteristically, as much a cri de coeur as it is a work of art. The beauty of Ai’s epic imagery feels like a perpetual challenge: Are you looking? Are you listening? Are you responding?