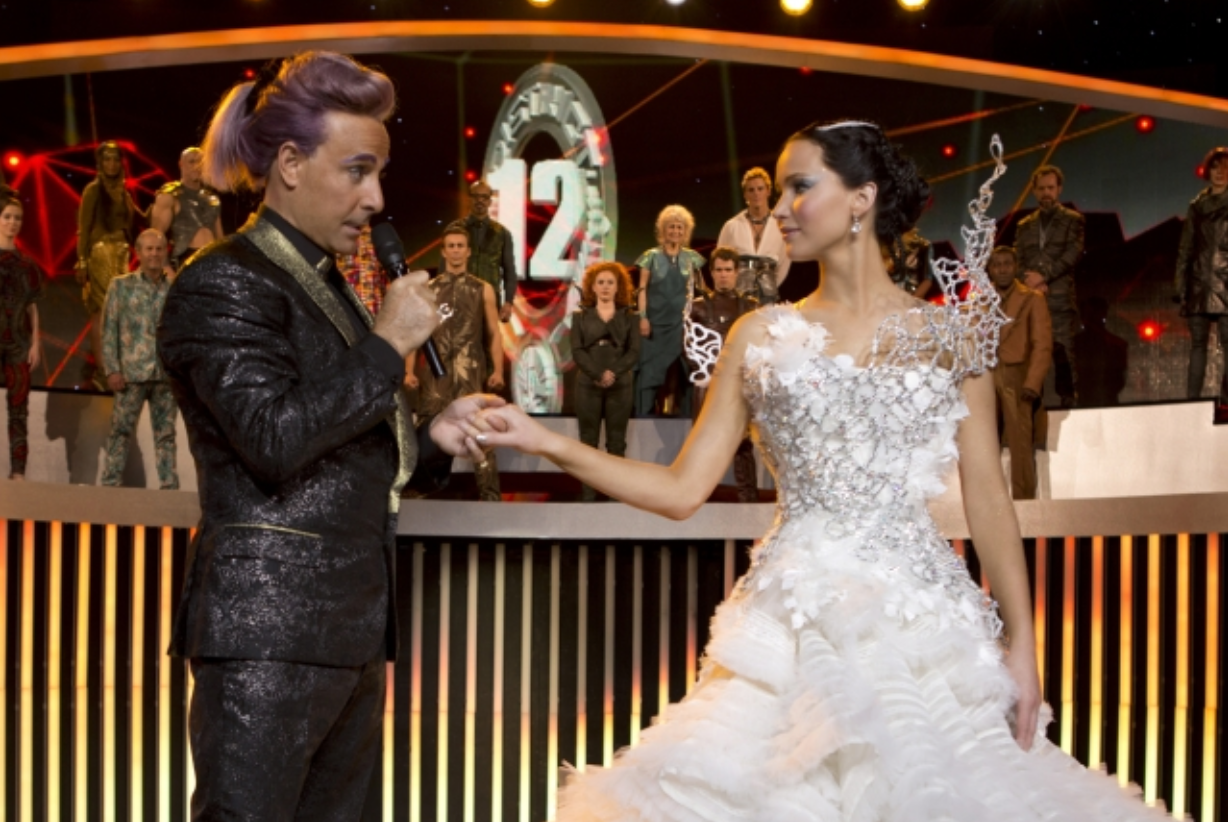 Jennifer Lawrence looms large over “The Hunger Games” franchise. She snags the lion’s share of the magazine covers, has an Oscar on her mantelpiece and even scored a catchy nickname — J-Law.

When it comes to box office performance over the past decade, however, Katniss Everdeen is stuck in the middle of the “Hunger Games” pack. In terms of total worldwide ticket sales, Stanley Tucci has the most formidable box office total with $2.7 billion, followed closely by Woody Harrelson. To be fair, it’s a volume game — both are popular character actors who pop up in multiple films each year, while J-Law is a newcomer.

But they’re not the only denizens of Panem to outflank Lawrence at the global box office. Josh Hutcherson, who is more or less Lawrence’s contemporary, may lack her name recognition, but with a mixture of blockbuster adventures such as “Journey to the Center of the Earth” and indie darlings such as “The Kids Are All Right,” his films have actually made more money globally. His box office total stands at $1.95 billion, roughly $600 million more than Lawrence’s films have grossed.

That’s not to say that studio executives would feel more comfortable bankrolling a movie starring Tucci, Harrelson or Hutcherson than Lawrence, who is probably the only member of the film’s cast on the A-list from a commercial perspective. One thing all of these actors have done, however, is wisely mix passion projects with films geared at the broadest possible audience.

Here’s a look at the box office performance of the various contestants, spectators and string-pullers who make “The Hunger Games: Catching Fire” such a memorable ride.

STANLEY TUCCI
Box Office Total Since 2003: $2.7 Billion
Number of Films: 20
Biggest Non-“Hunger Games” Hit: “Captain America: The First Avenger” ($370.6 Million)
Weakest Performer: “Blind Date” ($8,449)
Analysis: Tucci benefits from being a chameleon. He can do drama, he can do comedy, he can even do superhero movies (Chris Evans wears the tights in “Captain America,” but you get the picture).  Not everything works. The Tucci magic touch couldn’t save the hugely expensive “Jack the Giant Slayer” ($197.7 million) from disappointment, but his memorable character turns have been a key ingredient in hit movies like “The Devil Wears Prada”($326.5 million) and “Julie & Julia” ($129.5 million).

WOODY HARRELSON
Box Office Total Since 2003: $2.64 Billion
Number of Films: 27
Biggest Non-“Hunger Games” Hit: “2012” ($769.7 Million)
Weakest Performer: “Scorched” ($8,000)
Analysis: Like Tucci, Harrelson is mighty prolific. The man appears in two to three films each year — straddling genres from kids movies like “Free Birds” ($42 million and counting) to fanboy fare like “Zombieland” ($102.4 million). He’s also no stranger to the low-budget world, with mixed results. Bank robbery comedy “Scroched” eked out $8,000 and appears to have only been seen in theaters by Woody’s extended family, but dark dramas like “The Messenger” resulted in an Oscar nod, even if it only grossed $1.5 million. Plus, he’s the rare “Hunger Games” actor to have had a film that actually eclipses that blockbuster’s $691.2 million haul, as he did with Roland Emmerich’s “2012.”

PHILIP SEYMOUR HOFFMAN
Box Office Total Since 2003: $1.05 Billion
Number of Films: 14
Biggest Non-“Hunger Games” Hit: “Mission: Impossible III” ($397.8 Million)
Weakest Performer: “Jack Goes Boating” ($619,570)
Analysis: Hoffman is at a disadvantage when it comes to this particular numbers game, because he is a newcomer to the “Hunger Games” franchise. His character, the game maker Plutarch Heavensbee, is introduced in “Catching Fire.” That deprives the in-demand character actor of roughly $700 million from his total box office haul, but it’s not as if Hoffman has been idle during the last 10 years. He’s picked up four Oscar nominations (and one win) and even found time to try his hand at special effect driven action films, as he did playing foil to Tom Cruise in “Mission: Impossible III.” It’s a safe bet that when “Catching Fire” debuts in theaters, it will give Hoffman the biggest hit of his illustrious career.

LIAM HEMSWORTH
Box Office Total Since 2003: $1.27 Billion
Number of Films: 6
Biggest Non-“Hunger Games” Hit: “Expendables 2” ($300.4 Million)
Weakest Performer: “Love and Honor” ($16,769)
Analysis: Hemsworth is best known for his stint as Miley Cyrus’ main squeeze. Carving out an identity independent of the twerking songstress has been tricky. Being part of the ensemble casts of “Expendables 2” ($300.4 million) and “The Hunger Games” ($691.2 million) resulted in big hits, but his foray into leading man territory with last summer’s “Paranoia” was a disaster, sputtering out at just $7.4 million worldwide. There’s still hope, of course. Hemsworth is witty and engaging in interviews, and his role in “The Hunger Games” gets bigger as the series progresses.  He needs to seize the screen time to prove he’s got what it takes to anchor his own vehicles or he risks being forever known as Chris Hemsworth’s little brother.

DONALD SUTHERLAND
Box Office Total Since 2003: $1.66 Billion
Number of Films: 17
Biggest Non-“Hunger Games” Hit: “Horrible Bosses: ($209.6 Million)
Weakest Performer: “Land of the Blind” ($15,180)
Analysis: Were this a full career retrospective, Sutherland and his over 150 film and TV credits might land on top. As it is, most of the acting titan’s work has been on the small screen, in TV movies like “The Pillars of the Earth” or “Moby Dick.” Still he has found time to lend some gravitas to a few hit films such as “Horrible Bosses” ($209.6 million) and prestige fare such as “Pride & Prejudice” ($121.1 million). Plus with films like “Ordinary People” and “M.A.S.H.” on his curriculum vitae, who cares about a pesky thing like box office?

ELIZABETH BANKS
Box Office Total Since 2003: $1.84 Billion
Number of Films: 24
Biggest Non-“Hunger Games” Hit: “The 40-Year-Old Virgin” ($177.4 Million)
Weakest Performer: “Ordinary Sinner” ($4,083)
Analysis: With her sardonic wit and crack delivery, Banks has turned herself into a reliable comic presence in films like “Fred Claus” ($97.8 million) and “Pitch Perfect” ($113 million). Despite her good looks, she’s more of a character actress than a leading lady, and with the exception of the Oscar-nominated “Seabiscuit” ($148.3 million), dramatic turns in films like “W.” ($29.5 million) and “The Next Three Days” ($67.4 million) have been indifferently received at the multiplex.

JOSH HUTCHERSON
Box Office Total Since 2003: $1.95 Billion
Number of Films: 12
Biggest Non-“Hunger Games” Hit: “Journey 2: The Mysterious Island” ($335.3 Million)
Weakest Performer: “Little Manhattan” ($1.1 Million)
Analysis: Hutcherson is shaping up to be the rare child star who can transition into a career as a gainfully employed adult actor. He’s adroitly mixed weighty fare such as “The Kids Are All Right” ($34.7 million) with popcorn entertainments such as “Journey to the Center of the Earth” ($242 million) and “Epic” ($260.7 million). There have been missteps — the less said about “Red Dawn” ($44.8 million) the better — but it’s a formula that seems to be reaping dividends. Just ask Jennifer Lawrence.